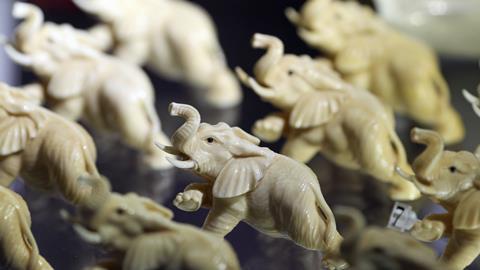 Or horns, antlers, teeth or ivory… identifying mineralised tissue in the fight against wildlife crime

From its ancient Celtic roots, Halloween has become a global holiday. In the US, Halloween activities range from delightfully foolish to downright ghoulish. Americans love their tricks and treats, spending billions on costumes, candy, celebrations and creepy decor. Some of that decor is a little too good at creeping folks out. In early October 2015, a face down clothed dummy brought not just the neighbours’ attention to a Detroit, Michigan resident’s home, but also repeated visits by the police.

Not that horrifying decorations are an American specialty. A resident of New Brunswick, Canada, got a jump on Halloween in June 2019 by snapping up a realistic looking Cryptkeeper-like skeleton for a couple bucks at a garage sale, then leaving the frightening fake in their car while they ran errands only to have the real cops surround their car. In 2010, a Florida couple called the cops on themselves after they got suspicious of the Halloween skeleton they acquired at a garage sale. Experts determined the skeleton was real human remains, but did not suspect foul play; it was judged to be a professionally prepared anatomical specimen.

Distinguishing artificial bones from the real thing – simply by looking – can be tricky for non-experts. To make it more complicated, what if it is not bone at all, but some other mineralised tissue like teeth, horn, antler or ivory? All are bioapatite materials, each sharing chemical similarities. But an expert would also know their distinct differences. For instance, the horns that mark the biological family Bovidae (which includes cattle and goats) have a keratin sheath, while the antlers unique to family Cervidae (deer) do not. Antlers are more structurally and chemically similar to bone, ‘primarily being comprised of type I collagen and minerals’.1 Horns, antlers, and bone can be distinguished from ivory tusks as, like teeth, ivory has enamel, cementum, and a pulp cavity.2

Let’s say a sample is classified as ivory. What type of ivory is it? Did it come from extinct mammoths and mastodons or modern elephants, hippopotamuses, walruses, warthogs, sperm whales and narwhals? Does it matter? Absolutely. In the US, a near total-ban on the trade of African elephant ivory went into effect in 2016. In 2019, a law that would implement the world’s toughest ivory ban gained Royal Assent in the UK (although the act has yet to be implemented and the sale of ivory in the UK currently remains legal).

If the questionable item is not ivory, then it is likely bone that is carved, polished, dyed and otherwise altered in an attempt to pass it off as ivory. Not that trafficking in animal bones means no crime has been committed. According to the United Nations’ Office on Drugs and Crime (UNODC), ‘wildlife and forest crime today has transformed into one of the largest transnational organized criminal activities alongside drug trafficking, arms, and trafficking in human beings’. The UNODC’s 2019 report on their Global Programme for Combating Wildlife and Forest Crime, stated that wildlife crime as a threat to ‘the rule of law, good governance, economic development, and the health and livelihoods of billion of people,’ continuing ‘[i]ts impact on biodiversity and climate change is only now being recognized’.3 Wildlife crimes continue to have a huge impact on African elephants, with the UNODC reporting the killing of these mammals for their ivory is at critical levels and their chief cause of death.

The illicit ivory trade, as with many activities associated with any form of trafficking, is as lucrative as it is deadly. Forensic analysis is pivotal to trafficking investigations. A variety of analytical methods are available, most providing a wealth of information so that the material can be classified by type and species.1,2,4 Of the methods used to assess mineralised tissue, some of the most popular are invasive (eg DNA sequencing or thermogravimetric analysis). However, non-invasive methods (eg Raman spectroscopy or x-ray fluorescence) can offer robust analysis without sample consumption. Beyond criminal investigations, conservation work is another beneficiary of non-invasive method development.

One such method, recently developed by Hieronymus Hoelzig and colleagues at Leipzig University in Germany, uses x-ray diffractometry (XRD) with accompanying statistical visualisations to discriminate elephant ivory, bone and antler.4 Their test set comprised 88 bioapatite samples, including some extensively altered to create jewellery, tools and figurines. Distinguishing between ivory, bone, and antler required collecting XRD data at several different orientations per sample. For each mineralised tissue, apatite crystal orientation is dictated by collagen fibre arrangement, which is different for each bioapatite. These structural differences correspond to a characteristic dispersion of intensity ratios per sample. The researchers noted that their method could become part of a multi-methodical approach, complementing existing analysis techniques.

Sticking with x-rays, research with a non-invasive handheld x-ray fluorescence (XRF) device by Kittisak Buddhachat of Chiang Mai University in Thailand, and coworkers, showed that elemental content and stepwise discriminant analysis can aid in classifying mineralised tissue.1 This work, published in 2016, was ‘the first comparative study to explore the accumulation of multiple elements’ in bone, teeth, antler and horn.

Though ivory was not included in their analysis, the method revealed that the elemental content of mineralized tissues could be used to differentiate species. The humerus bone was noted as the ‘best source for species discrimination’, with the species correctly predicted for 11 out of 14 samples. Four species had iron in their humerus bone, with the iron level in the Asian elephant humerus significantly higher than in the others. The teeth of eight species were evaluated, with aluminium found only in the Asian elephant, human and Assam macaque. Chlorine was present in horn, but not antler. The two Cervidae species were distinguished easily from their antler composition, but the 10 Bovidae horns proved tougher to interpret, with researchers reporting 75% accuracy in species classification.

The results presented by Buddhachat and co-workers are extensive, indicating that distribution of elements within and among different bioapatite specimens – due to various biological processes – can help separate species.

Being able to identify remains, whether wildlife or human, is an essential first step to investigations. Whether those investigations point to crime or not, pinpointing the source of remains enables pivotal steps to be made toward a resolution.

This article was updated on 30 October 2020. An earlier version stated that a law had come into effect in the UK to introduce an ivory ban; to clarify, while the act has been given Royal Assent, the law has not yet been implemented.

3 United Nations Office on Drugs and Crime, 2019 Annual Report of the UNODC Global Programme for Combating Wildlife and Forest Crime, 2019