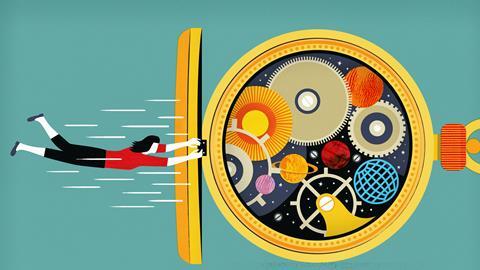 ‘In crossing a heath, suppose I pitched my foot against a stone, and were asked how the stone came to be there; I might possibly answer, that, for anything I knew to the contrary, it had lain there forever.’ So begins the famous passage in William Paley’s 1802 book Natural Theology, in which he argues that the exquisite forms and structures we find in nature can only be the product of divine intelligence. If, Paley said, he came instead across a watch, it is utterly implausible that such a contrivance could have arisen by chance. ‘There must have existed, at some time, and at some place or other, an artificer or artificers, who formed [the watch] for the purpose which we find it actually to answer’, he wrote.

As Richard Dawkins explains in The Blind Watchmaker, Paley’s argument lost all force once Charles Darwin showed that natural selection can produce such apparently purposive artifice, given just random mutation, natural selection and time. But could natural selection make an actual watch? No; the material nature, the precision and indeed the function of its parts really does seem to demand a watchmaker – which, however, itself arrives courtesy of Darwinian evolution.

There seems, then, to be an inevitable time-ordering of these objects. The rock is first, by a long stretch; but only after the appearance of the human (and of human culture generally) is the stage set for the watch. Might there even be some law of nature which dictates that a watch must predate a quantum computer, and which currently precludes the existence of the as-yet undreamt marvels that, fate and climate willing, our descendants will one day produce?

These seemingly speculative questions are precisely of the kind that assembly theory, devised by Lee Cronin of Glasgow University, UK, Sara Imari Walker of Arizona State University, US, and their co-workers, seeks to address. Arising out of efforts to identify meaningful biosignatures in the search for extraterrestrial life, the theory is blossoming into an immensely ambitious account of the origins of complexity and of cosmic evolution.

Cronin and Walker figured that there is a Paley-type argument to be made about biomolecules: not that they need a divine chemist, but that only a blind Darwinian one could produce them. The chances that random polymerisation of amino acids, say, will assemble multiple copies of the complex, hierarchical structure of a protein like haemoglobin is essentially zero: it is a molecule with a function. That, at any rate, might be our intuition – but last year Cronin, Walker and colleagues presented compelling empirical evidence that this is so.1

They assign any molecule a ‘molecular assembly number’ (MA) that quantifies its complexity by enumerating all the ways in which the basic building blocks (atoms) can be joined to produce it, and selecting the shortest path. The MA then also gives an upper bound for the probability that such a molecule would appear in the universe more than once by sheer chance. The researchers showed that the theoretical MA correlates well with the fragmentation pattern the corresponding molecule displays in mass spectrometry. This supplies a quick and easy empirical method for measuring it – of the kind that might be readily conducted, say, by a robotic lander on a planetary surface.

Did Tristram Shandy have to precede Finnegan’s Wake? I await answers.

Crucially, the team showed that while living systems can generate molecules with a wide range of MAs, inorganic systems can never produce high-MA molecules. If you were ever to stumble across a molecule with an MA comparable to taxol, you could feel confident it was made in a living organism – or, if on another world, then by a chemical process so complex that it would surely warrant consideration as lifelike. Life, you might say, is a process that produces MA values in excess of some critical threshold.

While that’s an exciting prospect for forthcoming missions to worlds like Titan and Europa, Cronin and Walker have bigger goals in mind. For example, the theory implies a temporal directionality that has nothing to do with thermodynamics but derives simply from combinatorics: there is a natural order in which objects can appear. Assembly, Cronin says, is a fundamental quantity on a par with energy and entropy. And assembly theory can be applied widely: to technology, linguistics, evolution. Did the sponge have to precede the fish? Did Tristram Shandy have to precede Finnegan’s Wake? I await answers.

One of the great attractions of these ideas – for this audience, at least – is that they place chemistry at the core. For here’s the puzzling and insufficiently recognised fact: it seems that only when we reach 25 orders of magnitude above the Planck length does matter acquire the right character to become indefinitely combinatorial – there is, for example, no chemistry of quarks. It’s only at chemistry’s scale that the universe gets truly creative. But you knew that, didn’t you?