Faking flakes whatever the weather 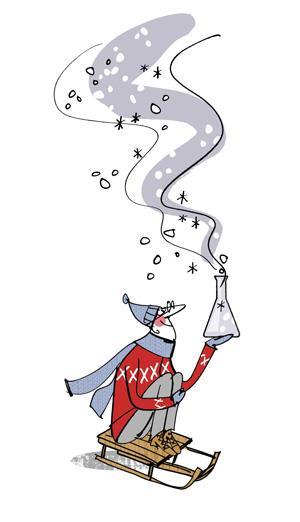 This year, as Bing Crosby once sang, I’m dreaming of a white Christmas. It’s probably not going to happen for us in the UK, but at least it’s no less likely than usual – there are even mutterings of a cold winter on the way, and I live in hope. There are other situations, however, in which it won’t do to just rely on the weather. Skiing and other winter sports rely on having well-carpeted slopes throughout the season, and sometimes a helping hand is needed in the form of artificial snow.

Like so many scientific innovations, the first artificial snow was created by lucky accident. In the 1940s, a group of Canadian scientists were trying to study the effects of rime ice (the white ‘frost’ that forms on surfaces) on jet engines. In an attempt to re-create real outdoor conditions they were throwing water in front of a running engine in a low-temperature wind tunnel. Instead of ice forming on the engine, they got mid-air snow, as the water cooled and froze into the characteristic hexagonal crystals that grow into snowflakes. At that time their ‘invention’ was more of an annoyance than anything else, as the snow quickly collected on the ground and had to be shovelled out of the tunnel. They published their findings, but didn’t try to commercialise them.

The first patented snowmaking machine came later, during a slump in sales at a US ski manufacturing company in the early 1950s. Engineers at the Connecticut-based Tey Manufacturing Company came up with the idea of blowing water droplets through freezing air. Their first crude device was cobbled together using a paint spray compressor, a nozzle and a garden hose. Over the following years, snow cannons based on the same principle have caught on at ski resorts and indoor snowdomes – today’s versions incorporate heavy-duty air compressors and water pumps, as snowmaking requires huge amounts of water (it takes about a tonne of water to make a 10cm-deep layer of snow over a 20m2 area). Many also use nozzles or fans to break up the water into fine droplets, and add ice-nucleation proteins from bacteria, which allow the crystals to form at higher temperatures (earlier versions used dust particles as nucleation centres).

Away from the slopes, you may want to create the appearance of snow without any of the cold. In this case, a fairly decent decorative mimic can be crafted from white, fluffy-looking hydrated superabsorbent polymers. This kind of ‘snow’ is often used on film sets, as frozen water would quickly melt under hot studio lights. It may also pop up in festive – but cosy – Santa’s grottos, and you can even buy it in packets for home decoration. If you’re after something more realistic, but don’t have a real snow cannon to hand, you may even be tempted to join in the recent craze of throwing a kettleful of boiling water out of the window (and of course, filming and posting the result online). If the air outside is cold (and therefore dense) enough, this can create a pretty spectacular visual effect as the rapidly vaporising hot water precipitates out to form crystals. But it is not to be recommended – the deceptively snow-like flurry still contains boiling water and can scald anybody it lands on.

But despite the best efforts of snowmakers, nothing can quite replicate the real thing, nor the sheer joy of watching natural snowflakes twirl through the sky. If I want a genuine winter wonderland this Christmas, I’ll just have to keep my fingers crossed.