By the time I read your feature on whisky (Chemistry World  , December 2008, p40) the magazine’s packaging had been binned. So I could not sample the whisky miniature that must have accompanied this excellent article. CW  is, after all, the official organ of a professional body still associated with both practical and theoretical standards. In the unlikely event that you have any samples left in the office, I do not mind paying the postage.

What has happened to chemistry? Every month when I read Chemistry World  I find there is less in it about chemistry and more about physics and physical methods. Most of the adverts are for magic boxes that will give results in a fraction of the time required by chemistry, with the operator only requiring to put his finger on a button. The name of the physical equipment often ends in ’ometer’.

While I admit that I have used many of these ’ometers’ with great success in my working life I deplore the article by Andrea Sella, (Chemistry World  , November 2008, p67) on the Abb? refractometer. I do not know where he got his information from but I would have been pleased to know the method he used to differentiate between butter and margarine by refractive index. It is now over 60 years since I first used a refractometer for the sole measurement of soluble solids in jams and jellies, and that not very accurately and never for determining butter in mixtures.

To do this I did not need a mass spectrometer or a gas chromatograph as Sella seems to require, but simple chemistry in the manner of Reichert, Polenske and Kirschner, developed at about the same time as Abb?. 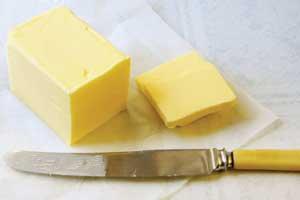 Reichert, Polenske and Kirschner values have been used in the analysis of the fats in butter / margarine since the 19th century

This depends on the fact that the fat in milk contains butyric acid. The fat is saponified, acidified to release the fatty acids, with the lower ones separated by steam distillation. Butyric acid is soluble in water and is separated from the insoluble solid volatiles like capric acid by a filter funnel and paper. The amount of butyric acid in the filtrate is determined by titration with standard sodium hydroxide to give the Reichert Value.

If the Reichert value is less than 28 the butter sample is suspicious and as an aid to identifying the adulterating fat the insoluble fatty acids can be used to give the Polenske and Kirschner Values.

I would also question Sella’s assertion that ’everyone knows that the speed of light is not constant’. Certainly Albert Einstein would not agree as the basis of his Relativity theory is that light always travels at the same speed and an observer at any point in the universe measuring its velocity will get the same answer.

Dr Arnot is quite correct in saying that a refractometer could never be used to quantify, let alone identify, the adulterants in butter. Reichert’s is undoubtedly a superior and very widely used, but more laborious, method. But the Pulfrich-Abb? refractometers were quickly adopted in the food industry since they did allow very rapid qualitative screening. They were also widely used by synthetic chemists who used the values much like melting points, as a quick diagnostic indicator of purity.

Arnot is also correct in saying that the Theory of Relativity holds that the speed of light is constant to all observers. But this applies only in a vacuum. Refraction itself is a direct consequence of the change in the speed of light as it moves from one medium to another, an effect explained by Huygens’ wave theory long before Einstein came on the scene.

You named only four of the five people in last month’s Who, Where or When photograph (Chemistry World  , December 2008, p65). 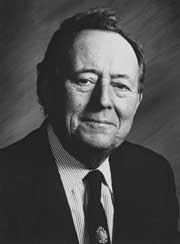 The fifth, on the extreme right, looks very much like my old PhD supervisor, J Howard Purnell, RSC president 1994-1996.

If Leslie Dix is right in regarding amine oxides as ionic liquids (Chemistry World  , December 2008, p34), then dissolution of cellulose in ionic liquids goes way beyond the literature which he cites. Cellulose is spun into fibres from its solution in
N  -methylmorpholine N  -oxide on a large scale both in the UK and the US.

The process was developed to industrial production by Courtaulds in the 1980s and the fibre is marketed under the trade name Tencel, currently by Lenzing.

Ron Dell requested information about the three rubber balls he had obtained from Polysar, Sarnia, Canada, which bounced to differing extents (Chemistry World  , September 2008, p43). The difference is caused solely by the microstructure of the elastomers.

The one with 90 per cent bounce is cis  polybutadiene, the one with very little bounce is a copolymer of isobutylene (98-99 per cent) and isoprene (1-2 per cent) known as butyl rubber, and the intermediate one is a copolymer of butadiene and styrene. Glass transition (Tg) plays a role in the coefficient of restitution of elastomers. However, butyl is unique in its behaviour. The polyisobutylene molecule packs very well and absorbs energy more readily that the Tg would predict. Also butyl rubber is very impermeable to gases.

Thus (halo)butyl elastomers are used in inner tubes, inner liners and a variety of energy absorbing applications such as vibration dampers.

Polysar, where I worked before retirement, no longer exists as such; it is now part of Lanxess.

I read the Literary Reactions feature (Chemistry World  , December 2008, p49) with great interest. However, I was sorry that The Catalyst   by G O Jones was not included. This groundbreaking book, first published in 1960 (Faber & Faber) was well reviewed in the Sunday Times  .

It is the fictional story of a young scientist with a moderately good chemistry degree who is employed by a large chemistry company as staff chemist. He is puzzled by the mysterious and apparently irrational laws of company management and business intrigue but finally becomes a successful plant manager when he is given real job to do.

The authenticity of the company management and the scientific background add a further dimension to the reader’s enjoyment. I was a junior technical officer at ICI at the time and, like my colleagues, felt the book must have been written by someone who had experienced the workings of ICI at the time. It turned out that the author was in fact Professor G O Jones who was an academic at a Welsh University.

Readers who enjoyed Philip Ball’s article Literary Reactions in the December issue may be interested to hear of the novel White lightning  published in the early 1920s by the American writer and rhetorician Edwin Herbert Lewis. The author constructed this work in 92 chapters, corresponding to the then-known extent of the periodic table.

Thus chapter one is titled Hydrogen, chapter two Helium, and so on. Lewis’s style is hard to define for a modern reader, but he combines elements of the avant garde with more conventional narrative, particularly drawing on the experience of the first world war. The relevance of chapter contents to the title element varies greatly, but practical chemistry weaves its way through the narrative. In a number of chapters, Lewis faced the problem of an unknown element. On the first such instance, in chapter 43, he tackled this issue boldly by making reference to periodic relationships, and stating ’What this lover really lacked was something like manganese.’. While hardly in the same literary class as Primo Levi or Goethe, Lewis’s accomplishment deserves wider exposure, and should perhaps inspire future novels in the same niche genre.

The problem of NOx production as a by-product of the combustion, in air, of fossil fuel hydrocarbons in both car and jet-aircraft engines is well documented. So are we sure that the same doesn’t occur to some extent following hydrogen combustion - the ’pollution-free’ replacement fuel now being touted for cars?

We regularly hear politicians advocating a switch to hydrogen-powered cars to cut pollution and help reduce climate change, but will it? (I realise we might get H2/O2 fuel cells without NOx, but that is some time away).

I worry that the NOx is caused by the high temperature created by burning hydrocarbons in a
N2/O2 mix; a combustion chemist should know if the hydrocarbons are a necessary component.

Further to John Harris’s letter (’Lab Standards’, Chemistry World, December 2008), I write to offer my observations. He has hit upon an unfortunate truth that many involved in residue analysis know to be painfully apparent: accreditation is not an end in itself. 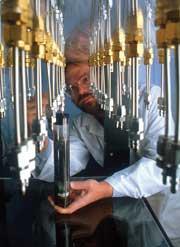 Not that accreditation is unimportant. Accreditation is a key part of the process of providing valid analytical data. It is only one part, and providing data that are fit for purpose is an ongoing cycle of observation, reflection, implementation and improvement.

My own field (veterinary residues) has struggled with this issue for years, and whilst the problem has not been totally solved, vast improvements have occurred. Our experience may be instructive, although concentrating the experience of decades to 300 words is a challenge.

Laboratories can, and should, set up networks to determine, promote and support best practice across the field. Regular analysis of reference materials is key. In areas where no, or very few, true Certified Reference Materials are available, this can be challenging. However, laboratories can produce and characterise their own ’in house’ materials, and these can be rolled out to others by groups of labs acting in concert.

Good, well-controlled external performance assessment plays a vital role. This process demonstrates consensus. If there is no consensus, this, in and of itself, is a key observation. Participants can discuss the lack of agreement, assess its causes and hence improve the state of the art.

Finally, overarching guidelines, or even regulations (such as Commission Decision 2002/657/EC), provide a solid framework for benchmarking.

One often hears that such procedures are time-consuming, expensive and stifle scientific flair. In answer, I ask laboratory managers how much time, money and effort are expended in repeating work, and how much scientific flair could one express if no-one trusts your result?