On the origin of cheeses

Can chemists uncover who invented the wheel?

When humans adopted agriculture as a way of life, it changed everything from our relationship with each other to our relationship with nature. Our diet in particular was forever altered. It was only a matter of time before someone kicked off one of the biggest (and smelliest) farming food trends of all time: cheesemaking. But what time was that exactly?

It would make sense that early agricultural societies turned to cheesemaking as a way of dealing with the short shelf life of fresh milk. Turning milk into cheese makes it easier to digest and whereas milk goes bad with time, cheese gets better. But cheesemaking is also quite a technical process, involving either enzyme or acid treatment and the removal of water-soluble lactose by straining off whey. Of course we can’t just assume that cheesemaking arose as a solution to the headache of ancient milk storage – that would just be speculation. Luckily, there are more scientific ways to investigate when the world’s first cheese might have been produced. 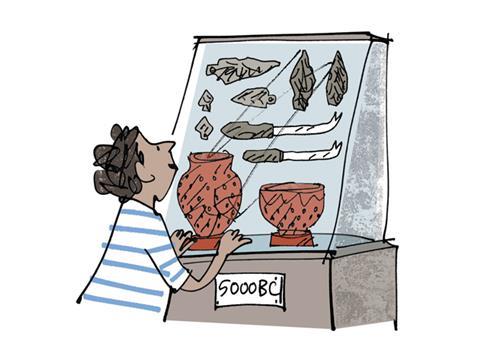 Archaeologists were first to attack the question by looking for artefacts that might indicate cheese production – such as a collection of Polish sieve-like vessels that could be cheese strainers, dating back to as early as 5300 BC. This was just as agriculture was gaining ground in eastern Europe and they were even found at sites with evidence of domesticated milk-producing animals. In short, everything fits. On the other hand, the utensils they found could also have been anything from beer sieves to flame covers. How can we know for sure?

In recent years, archaeologists have increasingly been turning to physical scientists to uncover the deeper secrets of ancient agriculture, and not just for their expertise in dating artefacts. In the case of the mysterious strainers, analytical chemists at the University of Bristol in the UK were called upon to take a closer look. By using lipid biomarkers and stable isotope proxies, they analysed the residues on a collection of ancient cookware from the sites.

They discovered that the different vessels carried different fatty acid residues and different stable isotopic signatures. This enabled the team to distinguish between different types of animal fat, and tease out the functions of different vessels. By comparing with modern reference fats, they found that all but one of the 12 sieves investigated had signatures that corresponded to dairy fat. By contrast, all the cooking pots showed signatures indicative of actual tissue fat, suggesting that they might have been used as pans instead.

While crucial questions regarding the type of cheese and exact method of production are still up in the air, this gave direct evidence for actual cheese strainers in the sixth millennium BC. The findings fit well with previous research providing evidence of milk pots in Anatolia, Turkey, a couple of hundred years earlier. Of course, this doesn’t have to mean that scientists have found the tools of the first ever cheesemaker – but it does provide the earliest evidence for cheese production so far.

This is just one example of the many chemistry conundrums to be found within archaeology, a field traditionally viewed as territory for the arts and social sciences. Perhaps those who start their academic career dreaming of drug discovery and things that go bang should consider adding ancient cheese to their list of interests.