Worms, octopuses, jellyfish: when you go fishing among polymer amphiphiles, you can catch some strange creatures. It’s telling that the metaphors used to describe the structures into which these molecules self-assemble are biological. Our minds seem to insist that what we’re seeing here has a lifelike aspect: that we are witnessing processes akin to microbiology. And who knows, perhaps we are? 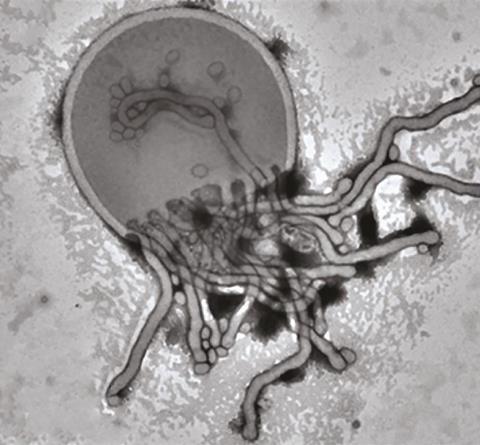 These microscopic forms have been reported by polymer chemist Steven Armes of the University of Sheffield, UK, and his coworkers in aqueous solutions of the polymers in the process of their own formation.[1][2] Amphiphilic block copolymers are chains of two halves with different propensities for solvents: typically, one block is hydrophilic , the other hydrophobic. In this much, the molecules resemble lengthened versions of the amphiphilic lipids and other surfactants forming spontaneously into bilayers (such as cell membranes), micelles, vesicles and other mesoscale structures to keep their hydrophobic segments away from water. But a delicate balance of molecular packing, curvature energy and other factors can make these sheets and aggregates take on complex forms, such as convoluted networks, tubes and ‘wormlike’ micelles.

Most surfactants have small, compact, charged head groups attached to tails made of oily, hydrophobic chains. But for block copolymer amphiphiles, both the head and tail may be long chains. This creates the possibility of new forms of self-assembly that are hard to predict. Amphiphiles made from peptide segments, which can be biocompatible, are being explored as self-assembling, injectable scaffolds for tissue engineering. In one example reported recently,[3] such synthetic molecules formed macroscopic tubes with the ability to self-heal if they rupture as they are extruded into networks.

The polymer amphiphiles explored by Armes and colleagues will form microscopic networks spontaneously, and much else besides. Their copolymers are made from two types of water-soluble methacrylate monomers, one of them forming a hydrophilic polymer and the other a hydrophobic one. The crucial factor is that the latter block grows on the hydrophilic one in situ by a method called reversible addition-fragmentation chain transfer (RAFT). This means that the polymer amphiphiles are still growing as they self-assemble, so that the structures evolve over time.

And how! With relatively short hydrophobic chains, the molecules assemble into small micelle-like blobs about 20–30nm across; longer chains can form micellar ‘worms’ perhaps a few hundred nanometres in length. These progressively lengthen and interlink until, for the longest hydrophobic chains, they form hollow, roughly spherical vesicles around 100–200nm wide, with bilayer walls.

But there’s more. Following the growth process over a period of several hours reveals that the nanostructures undergo a series of transformations: from blobs to worms, then to branched and partly coalesced worms. From these wormlike networks emerge the most bizarre forms: nascent half-vesicle domes with worms attached, looking like jellyfish. As the vesicles start to wrap up and close, they might stay connected by a worm, like two tethered balloons, until finally the bilayer shells close and seal off.

These structures, while complex, are controllable and predictable. And they might find uses. Armes has collaborated with cell biologists in work showing that a gel made from the wormlike copolymer amphiphile assemblies can act as a matrix that stores stem cells in a viable but quiescent state, suppressing cell proliferation. What’s more, the material will do the same for human embryos, rendering them dormant for days without cryopreservation.[4] With an industrial sponsor, Armes is now exploring the possibility of large-scale synthesis of the polymer materials.

Is there, though, anything truly lifelike about these complex structures beyond a superficial morphological resemblance? Maybe. Juan Pérez-Mercader at Harvard University, US, and his colleagues have just reported a modification of the RAFT method to make much larger polymer vesicles with remarkable behaviour.[5] These compartments are made from polymer amphiphiles formed in a photochemical polymerisation process by including a photosensitising agent that creates the free radicals needed for chain growth – meaning that polymerisation can be switched on and off with light.

From initial small droplets of monomer, the researchers grow vesicles as large as 10μm. But once they reach this ‘giant’ size, something unexpected happens: the vesicles rupture and return to the initial droplet state. The cycle repeats, again and again, as long as there is a light source. Pérez-Mercader and colleagues call this ‘phoenix behaviour’.

What’s more, the vesicles move towards the light. This almost spooky ‘phototaxis’ is, the researchers think, due to flow of water across the vesicle membrane, caused by an imbalance of its surface tension: the side facing towards the light experiences more polymerisation and so is more amphiphilic. Fluid flow due to surface-tension gradients called the Marangoni effect is well known.

Could these complex behaviours, including a primitive form of replication and directed motion, tell us anything about the origins of ‘protocells’ on the early Earth? That’s speculation at this stage – but for Pérez-Mercader, a member of Harvard’s Origins of Life Initiative, it’s undoubtedly part of the motivation.