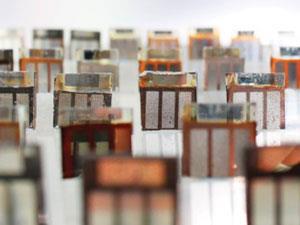 It’s rare to be in a conference session and feel an excited tension in the air, even more so when it’s after the 50 or so parallel talks have finished for the day, contains mainly younger researchers and is up against a big name in a plenary.

But that was the case at the Materials Research Society meeting I attended in Boston in December. It was a ‘rump’ session dedicated to perovskite solar cells, organised to accommodate the sheer number of people submitting talks on these hot new materials. There were 10 talks, each just 10 minutes long, and it was good to see how many were followed by questions from an engaged audience.

Perovskite-based solar cells have featured in these pages many times since their emergence a few years ago. They burst onto the scene with efficiencies that were already high for a new solar cell technology, and they’ve gone from strength to strength. Part of that strength is based on how tolerant they are to defects in their structure, especially compared to other light-harvesting materials that require pristine crystallinity. Mercouri Kanatzidis of Northwestern University near Chicago, US, assured me at the meeting that they’re so easy to make, even undergraduate lab experiments produce reasonable cells in a single afternoon.

At the meeting, I saw researchers show how perovskite solar cells can be made to be transparent, flexible and bifacial (so both sides collect sunlight and generate power) – and that was just in one talk! I was also struck by the breadth of talks, not just churning the handle making ‘me too’ analogues, but studying the devices’ dynamics, crystal growth, interfacial effects and so on.

There have been concerns expressed over the presence of lead (as methylammonium lead iodide) in a technology that could be very widely used in future. But providing the materials are stable and disposed of responsibly, this may not prove a problem – and in any case, significant efforts are already underway to produce lead-free alternatives. It is further worth remembering that other solar cells – that are already commercially available – contain unpleasant elements such as cadmium or selenium.

There are still hurdles to overcome (stability and water-sensitivity chief among them), but with legions of researchers mobilised and motivated, there are good reasons to be positive.