If the terrifyingly difficult problem of protein folding is getting closer to a solution, what other intractable problems are ripe for answering? 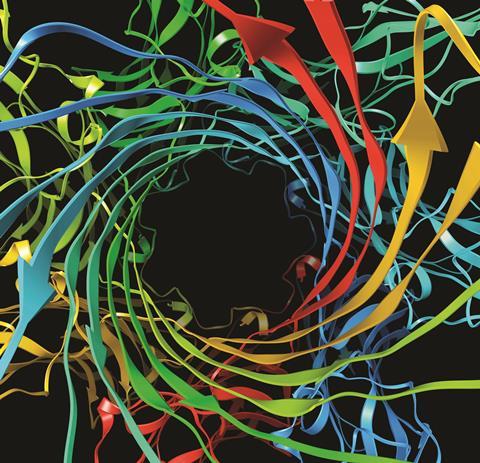 Protein folding is one of those problems that seems to get harder and harder the more you study it. Just the underlying numbers themselves are pretty terrifying: a 100-amino-acid protein (some go up to 30,000 amino acids) has 198 dihedral bond angles; if each of those can have three stable conformations, that gives the small matter of 3198 different conformations for the protein to adopt.

And that’s without considering the paradox first proposed by Cyrus Levinthal in 1969 – even if a protein could ‘sample’ a conformation every nanosecond or so, it would take longer than the current age of the universe to end up in the ‘right’ one. Even though the universe has aged nearly 50 years since it was posited, it’s fairly safe to say it’s still true – and proteins can still find their native folded state in milliseconds.

So just think how difficult and time-consuming the process is to model. It’s enough to make you give up – as the organisers of the Critical Assessment of protein Structure Prediction competition nearly did, when they found that the best of the protein folding community had to offer after so many years of the competition was still falling short.

But thanks to some improved computer power, the wisdom of crowds and the power of their idle computers – not to mention some very smart thinking – the problem of protein folding is slowly but surely being conquered. Don’t just take my word for it though, read the feature.

If protein folding can be (nearly) conquered, what other heights should scientists be aiming for? Is the lack of good quality predictions for crystal packing still the ‘scandal’ that Nature editor John Maddox branded it in 1988? It’s perhaps not a scandal any more – the latest ‘blind test’ crystal structure prediction competition, organised by the CCDC in 2015, resulted in four out of five of the target structures being predicted by at least one of the submission. But it’s not exactly routine either.

We’ve covered retrosynthetic algorithms in these pages a lot in the last few years, and most of the outputs are frighteningly good – and certainly a huge improvement over what this firmly inorganic chemist could ever have hoped to produce. This is an effort with a long history, from E J Cory’s early attempts in the 1960s to the recent advances. But if you need synthetic chemistry expertise, would you rather hire a living breathing chemist or an algorithm? As the algorithm can’t mix chemicals – yet – the cost saving would have to be pretty keen for it to be worthwhile.

Call me over-cautious, but I’m not going to call protein folding a ‘fixed’ problem just yet – rapid advances in computing power and the underlying science will undoubtedly mean than in 5–10 years’ time, the problem will look a lot more fixed, and bold claims from today will look a bit more foolish.