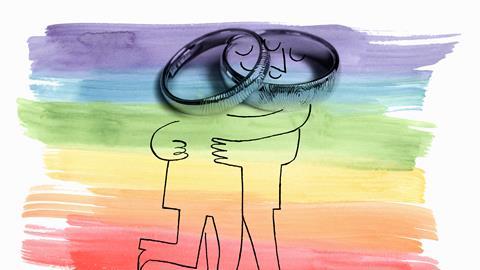 Studies have shown that sadly not every queer scientist feels safe at work. Among LGBT+ respondents to the 2019 report Exploring the Workplace for LGBT+ Physical Scientists, 28% shared that they had considered leaving their workplace at some point due to discrimination or the working environment and 20% of trans respondents revealed that they had often considered leaving.

It wasn’t until I started to visit schools regularly that I realised the impact of my visits as an ‘out’ queer scientist. In my first few forays into assembly halls and science classrooms I brought chemical stories and experiments that aimed to spark interest in electrons, atoms and elements in even the most unengaged teenagers. My intent was for all young people to know that Stem was open to them, and to help form positive memories of science, whatever their chosen career.

As I grew more confident, I started to insert more of myself into the stories. One day while celebrating the periodic table’s 150th birthday in a talk for senior school students, I mentioned my partner’s name while pointing to my wedding ring and sharing the cosmic origins of the gold in the band she chose. At the end of the session a student approached me, at first speaking so quietly that I didn’t notice them as I packed up my things. They had joined the first wave of curious students who had asked questions about chemistry and university study options, but now returned to whisper a thank you. As a young queer person considering their next steps in science, the student thanked me not for the chemistry I had shared, but rather for the content that revealed me as the first openly gay adult to enter their classroom during their entire time in school.

This visit occurred only 18 months after marriage equality was legalised in Australia and many worried about the impact of the plebiscite process on younger LGBTIQA+ people. The stories I have heard from school and university students about the importance of visible role models in their chosen field has confirmed that what we say and share matters.

Science is a drag

In the past few years, a number of groups supporting LGBTIQA+ scientists have emerged – and more overtly queer forms of science communication alongside.

‘Very often, we celebrate science in science spaces and they’re very different from queer spaces, so I wanted to bring science into a gay bar,’ says Brynley Pearlstone. ‘How do you do that? You make a drag show.’

Together with Sam Langford and Carla Suciu, Pearlstone co-hosts a livestreamed event, Science is A Drag. Covid-19 scuppered their original plan for a queer scicomm cabaret show hosted in a gay bar in Glasgow, UK, but the team were inspired by other performers to try out the show in an online format.

Lee Constable is a science communicator based in Australia and a recent participant in an online Science Is A Drag event as her Drag King persona Milton MANgo. ‘I’m a farm girl through and through and Milton is modelled on a caricature of many blokes I’ve been surrounded by growing up in terms of his accent, gestures, interests and appearance,’ shares Constable.

Constable first heard about the Science is A Drag format from a Canadian troupe who created the concept in a 2019 partnership with the Royal Canadian Institute for Science. ‘I fell in love with the idea and what they’ve been able to achieve with it!’ she explains. ‘I’ve been fairly vocal online about my love of drag … so I think that is why the UK team contacted me to invite me on.’

For Constable, ‘sciencey drag’ extends beyond science communication. ‘[It] is as much about introducing drag and all it represents to sciencey folk as it is about introducing others to science concepts,’ she explains. ‘I was really nervous about being a first timer doing drag in this because I didn’t want my lack of drag artistry skill to make it seem like I didn’t have full respect for the artform itself and the time it takes to hone. I have to start somewhere though and I want to do more!’

The next Science Is A Drag event has been planned to coincide with the eve of LGBTQ+ Stem Day, which is on 18 November.

#ScienceIsADrag is just a few days away

16th November!
8pm GMT
Tickets are pay what you want!

Join us for an evening of high quality queer STEM entertainment with some of the best science communicators around#LGBTQSTEMDay #QueerInSTEMhttps://t.co/crEQKufd0x

‘Ultimately I would love to see a discussion about what the broader Stem and scicomm community can do to combat bigotry against LGBTIQA+ people, particularly when members of the science community and broader public attempt to misuse concepts of biology and “nature” to make discriminatory statements about LGBTIQA+ people,’ says Constable. ‘There’s a lot we, as a community of Stem professionals can do!’