Quantum computing – it’s just as complicated as you thought

While editing Philip Ball’s feature on quantum computing, I re-acquainted myself with Schrodinger’s iconic equation. ‘Did I really used to understand this stuff?’ I sighed. I’m pretty sure I did, once upon a time, but my grasp on the detail now seems somewhat looser than it was when I was studying. So I will forgive any readers whose eyes may slightly glaze over at the mention of quantum computers – but it’s well worth your time, as the emerging discipline could revolutionise chemistry. 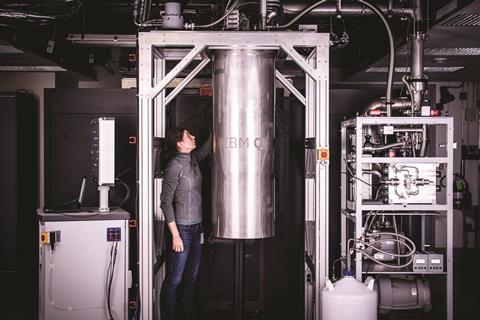 If that sounds like hyperbole, perhaps we need to consider how traditional binary computation has changed chemistry. It is rare to see an experimental study that deals with structures or mechanisms that does not have a computational aspect – either to guide the experiments or further interpret the data. It’s almost 10 years since I attended a Dalton Discussion conference on main group chemistry, and it was noted that almost every paper had computational work, either in collaboration with other groups or within the group itself.

As you can learn from the feature, quantum computers have the power to truly model complex quantum mechanical systems – molecules in other words – without any of the approximations currently used. This should result in much more accurate simulations, better able to guide and assist chemists.

But I think it’s only fair to add a note of caution. I’m sure many of you are familiar with widely shared articles from the early 1980s, suggesting that drug discovery will be done solely on computers well before the turn of the century. It didn’t quite turn out that way, and I’m sure it isn’t about to happen with quantum computing. Of course, computer-aided molecular design took off in a big way, and it’s impossible to imagine the pharmaceutical industry today without such modelling.

Will quantum computing be so ubiquitous in the coming decades? If it lives up to its promise, it’s hard to see how it won’t: who wouldn’t want to run calculations on their molecules with wavefunction-precision? But the technology is still in its infancy, as well as requiring whole new swathes of algorithms and understanding from its users. I think I’ll leave that to the next generation, with a better grasp of the Schrodinger equation than I currently have.