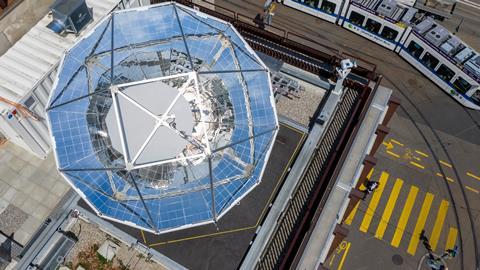 Reverse combustion is preparing for takeoff

Where burning hydrocarbons is unavoidable, creating them from atmospheric carbon is a promising option

Earlier this year, I wrote in this column about the possibilities of ‘reverse combustion’, the idea of producing fuels and chemical feedstocks out of carbon dioxide. Thermodynamically, that process is going to have to take energy. The question then comes down to making it as efficient as possible and sourcing those energy inputs in the least harmful way.

A paper from Aldo Steinfeld’s team at ETH Zurich in Switzerland describes a project aimed exactly at this problem. The team has been looking for some years now at producing fuels such as methanol and/or kerosene from ambient carbon dioxide. We already know how to make such things on an industrial scale from syngas – mixtures of hydrogen and carbon monoxide, often with some percentage of carbon dioxide. But as it stands, we generally produce syngas from fossil hydrocarbon feedstocks (steam reforming of natural gas, coal gasification etc), which makes it a way to convert between hydrocarbon fuels (gas, liquid, and solid) with an associated energy cost. Producing syngas from the carbon dioxide and water vapour in the air would be a welcome new variation – and compared to the water-based photovoltaic routes to synthetic fuels, it’s more direct and has fewer steps. 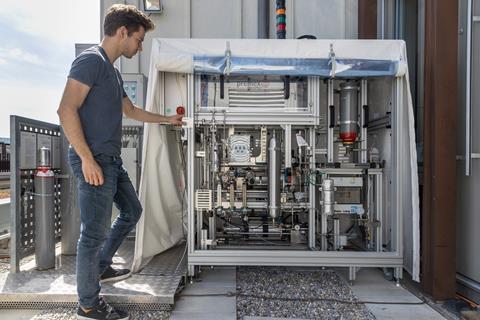 The research plant produces syngas, which can be processed into liquid hydrocarbon fuels through conventional methanol or Fischer–Tropsch synthesis

That’s what this latest work demonstrates. The water and carbon dioxide are adsorbed from the air, then pumped into a reactor zone using reticulated ceria (cerium oxide) as the catalyst. This is heated only by concentrated sunlight to yield a syngas mixture, and depending on the amount of carbon dioxide present (which can be adjusted) this can be sent into further catalytic columns for either methanol synthesis or hydrocarbon fuel via the Fischer–Tropsch process. One interesting advantage of using ambient gases as feedstocks is the absence of typical impurities, which keep the catalysts from fouling, and produce very clean products from an emissions standpoint – no sulfur, no poorly-burning aromatics, and so on.

The properties of liquid fuels are very hard to replicate for some applications, and airplane fuel leads the list

Now, this technology is not going to start delivering millions of tons of hydrocarbons any time soon. But the fact that it works at all is a demonstration of some potentially disruptive forces: fuels could be produced wherever there is sufficient sunlight, without regard to existing hydrocarbon deposits. Deserts would in fact be ideal locations. Engineering work that has already gone into solar-concentration power plants (and of course, the processes for conversion of syngas) would be directly applicable to much of this production as well. There’s also the big advantage of making ‘drop-in’ products, since the methanol and jet fuel can be used as is with the existing infrastructure.

But as the authors point out, such fuel is going to be more expensive for some time to come, and very much more expensive at first. They hope for some sort of policy support to encourage aviation fuel production via this route, which will allow the technology to gradually scale up and for engineers and chemists to improve it along the way. Every process of this sort benefits from the lessons of scale-up in the real world. Right now, for example, one of the biggest problems with the overall efficiency is the loss of heat during the back-and-forth swing between different temperatures needed. Using this more efficiently, along with new ideas for the ceria catalyst surface, better sunlight tracking and more, could eventually make this the preferred pathway for carbon dioxide extraction. And that in turn could start making a large fuel production sector carbon-neutral.

One objection is that it would be better to put such resources into finding ways not to burn hydrocarbons at all. But the properties of liquid fuels – transport, energy density, storage – are very hard to replicate for some applications, and airplane fuel leads the list. We absolutely need (some) jet transport in the world economy, so the opportunity to defang it from a pollution and climate standpoint seems too good to miss.

Another objection is that all such technological schemes to ameliorate these problems are somehow tainted. But I have never been able to subscribe to that viewpoint. Chemist that I am, I think that we invented our way into these problems, and that inventiveness should be helping us back out of them!