Unburning carbon dioxide economically and at scale is a tough problem, but potentially world-changing

With a scientist’s eyes, you can practically see carbon cycling through the living environment. Looking at a tree, you realise that it grew from a small seedling and that all that mass had to come from somewhere. Half the weight (more or less) of a living tree is water, but the other half is almost entirely various carbon compounds – and virtually all of that carbon was pulled from the air as carbon dioxide. The phosphorus, nitrogen, and sulfur came via the soil, but most of what you’re looking at used to be in the atmosphere. Burn the wood, and most of it goes right back. 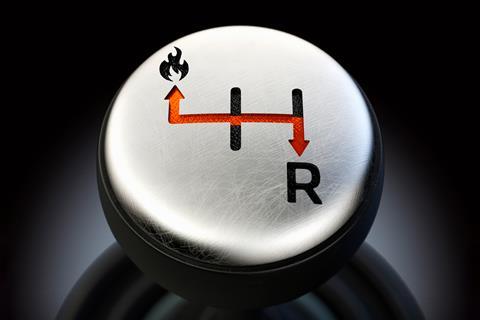 But imagine burning in reverse: taking carbon dioxide and turning it back into more reduced carbon compounds. That would be a fine thing in several directions at once. We would pull carbon dioxide out of the atmosphere, where there is definitely too much of it at the moment, and create a useful chemical feedstock without having to use fossil fuels along the way. Let’s use a short phrase that has vast amounts of work hidden inside and say that, run on a sufficiently large scale, such a process would change the world.

Virtually all the carbon in a tree was pulled from the air as carbon dioxide. Burn the wood, and most of it goes right back.

Now, your thermodynamic intuition may well be telling you (correctly!) that since burning is such a fine energy-releasing process, that reversing it is going to take energy being put back into the system somehow. There is indeed no way around that, but the key then becomes how to get that energy input down as low as possible. Look at nitrogen for an example: microorganisms are fixing atmospheric nitrogen on a vast scale at room temperature and pressure. Meanwhile, we humans rely on variations on the Haber process. That runs at high temperatures and pressures, using heaps of energy, but is keeping a substantial part of the world’s population alive and a substantial part of the Earth’s remaining wild landscapes unploughed through fertiliser production.

Similarly, plants are constantly reverse-burning carbon dioxide in their leaves. The external energy source is, of course, sunlight. And the energy barrier for the process is made as small as possible through enzymatic catalysis, just as with nitrogen fixation. That could be just the sort of thing to emulate, making a sort of giant supercharged solar-powered artificial leaf. What’s more, in plants the other half of the electrochemical reaction is water-splitting, which in an artificial system could be used to produce a very useful stream of pure hydrogen. Indeed, that process by itself would be a great advance. You will not be surprised to know that a great deal of money and effort has already gone into trying to realise such ideas.

We tend to think of enzymes as having amazing selectivity and turnover, but RuBisCo only works at the finger-counting speed of about three carbon dioxide molecules per second

Complications ensue, as they always do. Even if we match the enzymatic route, we would almost certainly deploy it first in situations where there’s a much higher carbon dioxide concentration available to work with, such as exhaust pipes and smokestacks. That means that our amazing catalyst will need to deal with the other components of that waste stream without fouling. And about that catalyst? The plant enzyme that handles the first step of carbon dioxide fixation is RuBisCo, and looking at it is a bit worrisome. We tend to think of enzymes as having amazing selectivity and turnover, and over the last billion or two years many of them have achieved extraordinary activity. But RuBisCo only works at the finger-counting speed of about three individual carbon dioxide molecules per second, which is why there is such a huge amount of it in any living plant (it is almost certainly the most abundant enzyme on Earth). That low turnover seems to be a direct consequence of getting the enzyme to take up carbon dioxide in its active site instead of oxygen. If there’s a way to get higher activity along with greater selectivity, evolution has (despite enormous payoffs for success) failed to stumble across it since the first photosynthetic life emerged, and that is indeed food for thought. Efforts are thus going into all sorts of interesting and unusual inorganic and organometallic catalysts, a landscape that biochemical evolution has not had the chance to explore so thoroughly.

Progress is being made, and there is no reason to believe that these goals are impossible. Our own ingenuity got us into the carbon dioxide trap, and perhaps it can get us out. The world may yet be changed ­­– again.