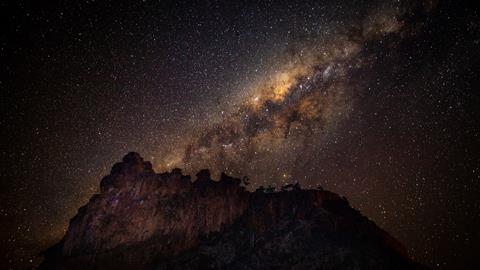 Astrophysics and Aboriginal astronomy on TikTok

At the start of 2020, astrophysics PhD student and science communicator Kirsten Banks was looking for a new way to share science with the public. ‘I was finishing up my job at Sydney Observatory as a tour guide and around the same time … the pandemic was really starting to take hold, and we were not allowed to go into schools, you weren’t allowed to have public events anymore. So I had to change the way that I did science communication very, very drastically.’

It was Banks’ partner who suggested that she try out video hosting service TikTok as a platform for her science communication, a move Banks describes as being ‘a very fun and wild ride ever since’. Under three years later, Banks has over 365,000 followers and over 9 million likes at her @astrokirsten account on the site. At the same time, her Twitter followers (to an account with the same handle) have grown from 5000 to over 40,000.

‘It’s absolutely astonishing,’ says Banks. ‘It’s so exciting to see that people are just as excited about space as I am – so much so that they want to follow along on my journey to enjoy learning about space and science with me.’

Banks has become particularly skilled at sharing science in the short video format supported by the TikTok platform, a big change from the longer in-person sessions she was used to leading as a Sydney Observatory guide. ‘I had 90 minutes, sometimes up to two hours, to explain many different things about space, astronomy and the universe,’ explains Banks. ‘But with TikTok you have 60 seconds … at least when I started it was only up to 60 seconds. That is a very short amount of time.’

Banks had to reconsider the way she explained things to fit the format, catch the attention of her audience and then keep them engaged. ‘I had to find these ways to make the start of videos exciting and enticing enough for people to see it and want to keep watching, and then to still have a bit of a balance between entertainment and fun,’ she explains.

Such a short format leads to difficult decisions about what elements are necessary for the story, and often it’s the parts of the science that are omitted that lead to the most interesting interactions between Banks and her many fans. Her intention is to create a dialogue with her followers and to explore areas of astrophysics that invoke curiosity in the public. ‘I’ve learnt a lot from the people that are part of my community now, just by the questions that they asked that I would have never considered asking myself.’

As a Wiradjuri scientist, Banks also interweaves Aboriginal astronomy into her videos, particularly when First Nations science represents a ‘very useful and relevant example of something that’s already been explained in a video’. One of her 2021 videos responded to the dimming of the red supergiant Betelgeuse that was observed in 2019. The phenomena was later attributed to a ‘stellar burp’ emitting gas and dust which condensed and then obscured light from the star.

‘In recorded history, yes, it’s the first time we’ve ever seen this happen, a star going through a bit of a burp,’ says Banks. ‘But Indigenous peoples from the Boorong people in north-western Victoria, in their star lore and their culture, they talk about a star appearing suddenly and then disappearing many, many months later. And looking back through historical records of stars and what they’ve been doing, people realised that this was actually the star Eta Carinae which went through a stellar burp, just like Betelgeuse did.’

It’s important for Banks that this information is not lost. ‘This has happened before and is something that we should talk about and recognise as science,’ she says. ‘Because they [the Boorong people] recorded when it happened, how big it was, how bright it was, what the colour was in their way of storytelling.’

In addition to sharing science, Banks also creates ‘behind the scenes’ content that lets followers see what life is like as a PhD student and popular science communicator, to try to make science more accessible and academics more relatable. ‘I definitely want to pull down the curtain on academia a little bit more for people who don’t experience it,’ she says. ‘I think it’s important to show people that there are our personalities and people behind the faces of academics.’

Banks’ science communication is jam packed with personality and humour and the ability to reach new audiences with rich visual content that brings astrophysics to life through beautifully crafted stories.

@astrokirsten Gosh that was fun, but I am still so tired 😅 #vlog #adaywithme #adayinthelife #scicomm #astro #space ♬ She Share Story (for Vlog) - 山口夕依