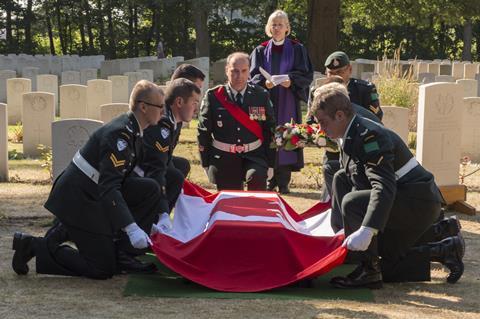 Forensic techniques can be used to identify and lay to rest casualties of war. In the photo, Private Kenneth Donald Duncanson, a second world war soldier whose remains were identified by Canada’s Department of National Defence and the Canadian Armed Forces in May 2016, is laid to rest with military honours by his unit in Adegem Canadian War Cemetery outside Bruges, Belgium.

Providing medical care, housing, food and a safe place are what many would list as humanitarian activities in response to armed conflict and catastrophes. Less often listed is the rendering of forensic science aid. But managing the dead with dignity, identifying them and providing answers to loved ones and communities are the aims of Humanitarian Forensic Action (HFA).1 Coined by the International Committee of the Red Cross, HFA was the subject of a 2017 special issue of Forensic Science International that illustrated the global and multi-disciplinary work done to provide aid after armed conflict, maritime shipwreck, infection disease epidemic, natural disaster, and more.

The second world war saw perhaps the first comprehensive use of forensic disciplines to investigate wartime mass killing, though investigators and researchers now use forensic science to evaluate conflicts and combatants dating from antiquity to modern day. Stable isotope analysis of dental material – a modern staple of human remains identification work2–5 – has recently revealed that the local combatants historians thought were involved in the fall of the ancient Greek city of Himera likely played no role.

Ruling people, objects and locations in or out is a major role of stable isotopic analysis. Forensically, this technique has been used to authenticate art and artifacts, fight food fraud, and reveal the origin of unidentified human remains.3 Where a person spent their formative years can be revealed by assessing the composition of strontium (87Sr/86Sr) and oxygen (δ18O) isotope within their bones and teeth,3,4,6 narrowing down a world of possibilities to a single region. Knowing a person’s early childhood location can connect investigators to family and potentially more records, both of which are critical to effect an identification.

When identifying war casualties, science does not come first. History does. A recent Forensic Science International special issue ‘WWI and WWII: Legislation, Recovery, Identification and Burial of Human Remains’ highlights the critical role robust historical analysis plays in reconnecting a set of human remains to their identity in life. Such an analysis is the first step the Canadian Armed Forces’s Casualty Identification Program takes upon finding human remains.2 Examining the events that took place in that location hopefully limits the list of candidates.

Next comes forensic anthropology to further narrow the candidate list. In war, records can’t be solely relied on – even when paired with anthropological data regarding age. When seeking to identify casualties from the first world war, Canada’s programme faced the ‘challenge that men often lied about their age in order to enlist, particularly those who were younger than the minimum age of eighteen’.2 Determination of 87Sr/86Sr and δ18O in teeth or bone – and possibly subsequent DNA analysis – can resolve inconsistencies and set the record straight.

Isotopic analysis has also revealed that the records for the second world war battle for the Kapelsche Veer bridgehead in the Netherlands may need revision. This series of engagements, which lasted from December 1944 to February 1945, saw soldiers of the British Royal Marine Commandos, Free Norwegian Commandos, Free Poles and Canadians fight against the German Army. In 2010 and 2012, two sets of human remains were recovered from this battle area during an explosive ordnance clearance. Laura Font and colleagues at Vrije Universiteit Amsterdam and the Recovery and Identification Unit of the Royal Netherlands Army worked to provide provenance for these unidentified casualties.3

Historical analysis revealed these remains were likely ‘missing in action’ (MIA) soldiers of British, Canadian, Norwegian or Polish nationality. Though fragments of British-made battle dress were found with the skeletal remains, ‘all nationalities wore British-made uniforms and used British-issued equipment’. The British Royal Marine casualties were noted as accounted for, no Norwegian MIAs were recorded, the dental records of the three Canadian MIAs ruled each out, and familial DNA testing revealed the possible Polish MIAs were not those discovered.

Isotopic analysis brought some clarity to the assembled conflicting and confusing information. The study of 87Sr/86Sr and δ18O data from tooth enamel revealed both casualties most probably originated from the UK, with the casualty recovered in 2010 likely to be from central-eastern parts of the country and the casualty recovered in 2012 most probably from the south coast. Based on this, the appropriate military units investigated if any of the British Royal Marine casualties had previously been misidentified. Given the chaos of war and the limitations of onsite forensic analysis at the time, misidentifications did happen. In modern times, forensic science can aid in making corrections and new connections.

In an addendum,7 Font and colleagues reveal that the casualty recovered in 2010 went missing in January 1945 and grew up in Wales. Familial mitochondrial DNA analysis led to an identification, and the casualty is missing no more.