One of my children was recently given a book of science experiments. A small and cheaply printed volume, it lists 100 classic demonstrations, from soap-propelled boats and cabbage indicator to a door bell and a rubber-band helicopter. Yet despite the pleasing contents, the cover was deeply irritating: it depicted a white man in a lab coat, with wild hair and googly eyes. 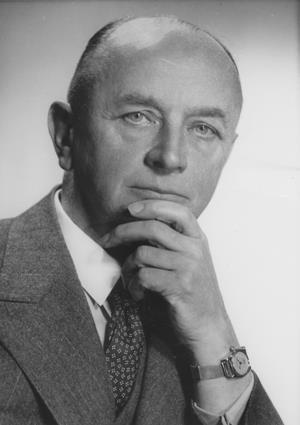 How have scientists come to be portrayed in this way? Some have suggested that the answer lies with mercury, citing Isaac Newton’s ‘lost years’ as example. But for chemists, it was Alfred Stock who showed that mercury use came at a high price.

Stock was born in Danzig, Germany, and studied in Berlin with Emil Fischer. Fischer is today remembered primarily for his studies of sugars, and his stereochemical projection remains the bane of many an undergraduate. But he was also a brilliant and far-sighted administrator who ran a huge research group. In the early 20th century, Fischer recognised that while organic and physical chemistry were progressing rapidly, mineral and inorganic chemistry was close to moribund. Fischer invited two assistants, Stock and Otto Ruf, to switch to inorganic chemistry.

Ruf would be sent to study with Wilhelm Ostwald to apply the techniques of physical chemistry to inorganic problems. Stock, meanwhile, was sent to Paris to do fluorine chemistry with Henri Moissan. Stock’s arrival in Paris must have been like opening a door on a new world: cultural life in the city was outstanding, and Moissan’s chemistry of extremes was far removed from the genteel science Stock knew. Materials were heated to thousands of degrees, compressed to intense pressures, and subjected to the biggest currents available at the time. Stock returned to Berlin with a whole new world to explore.

Stock focused on the chemistry of phosphorus, antimony and bismuth, including their allotropes, sulfides and hydrides. The compounds he and his co-workers handled were both air- and moisture-sensitive and in some cases thermally unstable. His experiments moved to ever lower temperatures, using liquid air in apparatus that he and his students designed or built for themselves.

In 1909, he took the chair of chemistry at Breslau where these techniques started to come into their own. Stock examined the reaction of magnesium boride with acids. In a detailed 30-page paper, he explained his method of collecting the gas from the reaction chamber and purifying the product by moving it through a glass manifold linking a series of U-tubes held at different temperatures, each monitored with a tall mercury manometer. The product, B4H10, proved a chemical goldmine. Stock had uncovered a family of compounds analogous to, but subtly different from, the alkanes of carbon. As reaction followed reaction, the chemistry got harder. The complexities required ever more elaborate manifolds, and to add to the challenge, the boron halides they made destroyed the primitive grease in the joints. 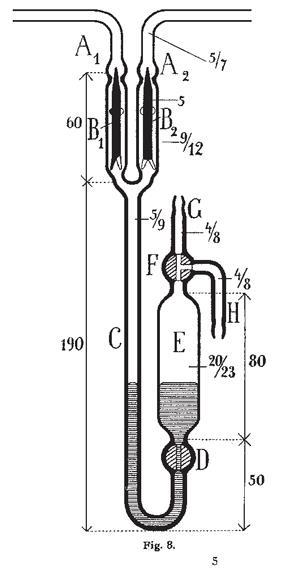 Undaunted, Stock devised something totally new: instead of a valve controlled by turning a glass stopcock, he placed two solid glass floats into the branches of a Y-shaped tube, each sitting just below a constriction in the glass. Below them was a chamber filled with mercury. By raising the mercury up into the Y, the Schwimmers would float upwards and press into the constriction, sealing it. He constructed a ‘universal apparatus’ that occupied a whole room, with parallel manifolds and multiple U-tubes in series controlled by mercury valves, mercury manometers and mercury pumps.

Stock moved back to Berlin, occupying Richard Willstätter’s position. Compound followed compound: boranes, silanes, carbon chalcogenides and more. Stock and his students systematically invented both the synthetic routes and almost every bit of equipment they used, from an automated Töpler pump, to low temperature thermometers, methods for determining sub-zero melting and boiling points, a mercury vat for chemical experiments and much more. The methods hugely influenced Wilhelm Schlenk, then exploring radicals and Grignard reagents.

But Stock’s health was, unaccountably, beginning to fail. His hearing worsened. His almost photographic memory would abandon him. He endured excruciating pain and exploratory surgery. It was not until 1924, when a pair of his students fell badly ill, that he realised they were all suffering from mercury poisoning. Stunned by the news, and terrified of his heavily contaminated labs, Stock accepted a position in Karlsruhe where he designed a lab to his own specifications. New linoleum on the floor would curve up the walls. Cracks would be sealed. There would be ventilation. His chilling call to arms in 1926 suddenly raised awareness of the dangers as he drew attention to past sufferers – Henri Pascal, Jöns Jacob Berzelius, Michael Faraday, Friedrich Wöhler, Justus von Liebig, Heinrich Hertz and Ostwald. The toxicology of mercury would be Stock’s final area of research.

So it is a belated tribute to Stock that in 2013, the United Nations Environment Programme at last agreed the Minamata Convention, to phase out almost all uses of mercury. Isn’t it time too, that we abandon the silly image of scientists being mad?

Thanks to Geoffery Cloke for prodding me to write this one.