The active uses of an inert gas 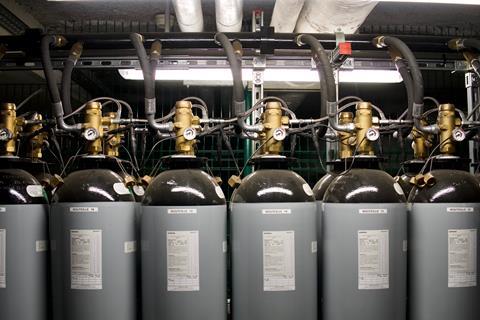 From firefighting to product refining, nitrogen has a whole host of uses in chemical plants

Most of an organic chemist’s work is done in various phases of the liquid and solid states. Reactants and reagents go into the flask or the reactor, the chemistry is done in the solution phase, and ideally the produce is immediately crystallised out. Sure, there is the odd reaction that generates gases, like diazotisation reactions. There are also some reactions that use gases like chlorine as a reagent. However, most days in our plant, gases do not take part much in the chemistry.

That’s not to say gases are unimportant. One in particular has many important roles to play: nitrogen. The most common reason to use nitrogen is the most obvious – we’re using it to make sure oxygen and a spark don’t start a combustion reaction with the solvents we use, which are typically fantastic fuels for fires. This creates a very significant nitrogen demand – 24 hours a day, our reactors have just enough nitrogen flowing above the reactions stirring below to keep oxygen out and keep our chemical operators safe.

It’s not just fire prevention where nitrogen is useful in the plant. Have solid product stuck in a bottom valve? Pump in nitrogen to blow the chunk of product out of the way. Want to provide a little agitation to a reactor where the main agitator is off? Nitrogen up the bottom valve can help with that as well. And if you can’t distil a reaction by heating it, you can often sparge out some solvent by blowing nitrogen pressure through the reaction mixture.

Considering that the customer cared very much about the colour of the material, constant access to nitrogen was essential

Nitrogen isn’t only good for blowing bubbles. We had a process that was a simple amide formation at a very high temperature, where the product was prone to discolouration when exposed to oxygen. Running this reaction under air would deliver product that was nearly black, while laboratory-bottled nitrogen that was sufficiently oxygen-free provided material that was a pleasing light beige. Considering that the customer cared very much about the colour of the material, constant access to nitrogen was essential.

How does a chemical plant get its nitrogen, anyway? There is the classic nitrogen cylinder that is commonplace in laboratories, seemingly indestructible and as heavy as a body to move. Most of us have undoubtedly wrestled more than one in place, and used a large wrench to place the regulator. Our plant also used to receive dewars, which are larger containers of pressurised nitrogen – you may know them as the wheeled steel containers you see NMR facility managers pushing around the laboratory to refill their magnets with liquid nitrogen.

It can be startling when the oxygen pressure is released in a big whoosh!

When our facility’s nitrogen demands became high enough, we purchased a pressure swing nitrogen generator. This is a fascinating, large piece of equipment that uses molecular sieves to separate oxygen from nitrogen. The generator has two parallel molecular sieve columns. When the first one is pressurised with air, the molecular sieves absorb the oxygen and allow the nitrogen to flow to the receiver. Next, the pressure of the two columns is equalised, and then the second column will be pressurised with air and relieved of its oxygen content. The whine of the motors as they pressurise the columns is noticeable as you walk by the generator, and it can be startling when the oxygen pressure is released in a big whoosh! This produces large quantities of oxygen-free nitrogen that can be piped all over a facility.

Pressure swing purification isn’t just for nitrogen either. We’re in the middle of a respiratory virus pandemic where oxygen is vital. In both the United States and Mexico, oxygen tanks have been in short supply at times. In Mexico, there have been thefts of oxygen tanks, even as purified oxygen is sufficiently plentiful.

A relative of mine took ill with Covid-19, but has happily gotten better. I was pleased to hear that he was able to go home with oxygen supplementation, but he did not end up with a tank. Instead, he had an oxygen concentrator. It wasn’t very loud, but it worked off the same principle as our plant’s nitrogen generator – it took in air and concentrated the oxygen for breathing. Rather than molecular sieves, his oxygen concentrator uses zeolites, this time to trap nitrogen. It’s amazing that a technology that can keep a plant safe by providing nitrogen can also be used to keep a patient healthy by removing it!