The explosive power of nitration

A violent but vital reaction 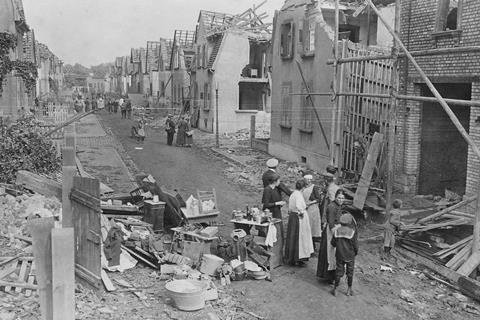 The main street of Oppau, Germany, was seriously damaged in 1921 after 2000 tons of ammonium nitrate exploded at the nearby BASF works. Around 600 people were killed

About once a month, a report of an accident in a chemistry laboratory will populate a Google News alert that I have set. The cause is typically the same: nitric acid in a waste container, into which someone unintentionally adds some acetone rinse waste or other organic solvent, creating an explosion that destroys a hood. It’s a demonstration of the power of concentrated nitric acid as a reactant – one that chemists routinely use to add a nitrogen into their molecule and one that industry harnesses for chemical processes.

It is difficult to overestimate the history and importance of nitration to both modern life and chemistry itself. The Nobel prizes came from the fortune of Alfred Nobel, who stabilised nitroglycerin in diatomaceous earth to make dynamite; nitroglycerin is made from the reaction of nitric acid and glycerol. You can’t just use any nitric acid, like the concentrated nitric acid that you have in your lab in the bottle with the red cap. Rather, you have to use ‘white fuming nitric acid’, which contains 95% nitric acid and doesn’t have any yellow or brown nitrogen oxides.

While nitrate esters made history as explosives, other forms of nitrates are ubiquitous. Ammonium nitrate is a common fertiliser and packed with the nitrogen that plants need to grow; it’s made by the simple reaction of ammonia and nitric acid. It too has an unfortunate history of large-scale industrial explosions, including the Oppau explosion in 1921 in Germany and the Texas City disaster in the US in 1947. In 2013, a fire broke out near a warehouse of ammonium nitrate in the city of West, Texas, and the subsequent explosion killed 15 people and destroyed much of the town.

It’s no wonder, then, that the informative reference Bretherick’s Handbook of Reactive Chemical Hazards has this grim statement of the risk associated with nitration: ‘the most widespread and powerfully destructive industrial unit process operation. This is because nitric acid can, under certain circumstances, effect complete and highly exothermic conversion to gases.’

Still, many millions of tonnes of products are nitrated each year across the globe. Nitric acid and other nitrating agents are used to manufacture intermediates for active pharmaceutical ingredients (as nitro groups are still a great way to install a nitrogen into a molecule). The extraordinarily common polyurethanes, found in furniture and synthetic fibres, use two monomers that require aromatic nitrations to take place; in the case of methylene diphenyl diisocyanate, it’s benzene that’s mononitrated to produce nitrobenzene, which is subsequently reduced to aniline. For toluene diisocyanate, toluene is dinitrated and then reduced to the amine functionality.

Waste isn’t the only difficulty nitration plants run into – you need to think about corrosion in your reactors as well. While choosing the right construction materials is crucial, you still need to think about inspecting your equipment to see if the nitric acid has been eating away the surfaces. Amazingly, coating the surfaces with PTFE may not be enough protection, as the nitrogen oxide species often dissolved in nitric acid can penetrate though this layer. Checking for the early signs of corrosion can be laborious, and will certainly require downtime and maintenance effort. However, it is much better than the different ways that leaks announce themselves – sometimes subtly with a slight pressure drop, or sometimes with a stream of acid pouring out of the reactor onto the plant floor.

If you’re not making millions of tonnes of nitrated material, there are a lot of newer technologies to consider. Flow units for nitration are a perfect setup for safely performing nitration on the kilogram scale, as they are designed to control temperature and also prevent a large quantity of reactant from nitrating at any one time. Just remember to segregate the nitric acid waste at the end of the process!