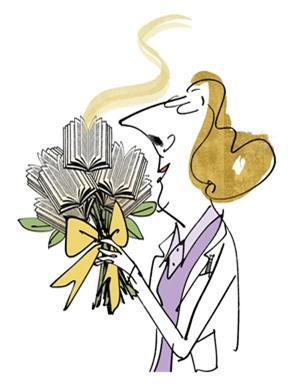 I’m sure you’re familiar with the distinctive smell of a brand new book. There’s something a bit artificial and chemical-y about it, and it’s hard to describe exactly why it’s so pleasant. Perhaps it’s all about association – to a true bibliophile, a bookshop can smell as enticing as a bakery or a fancy perfume counter. It applies to magazines too – and at this point if you’re reading the paper version of this I’d encourage you to give it a good sniff. You see what I mean?

Much like that of a fine wine, this ‘book-quet’ is the result of a complex mixture of volatile compounds detected by receptors in your nose. These come from the materials used to make the book, including the paper it is printed on – which likely contains various coatings and additives to make it stronger – and the glues that bind it together. There is huge variation between the compounds used by different manufacturers, so the exact aroma varies from book to book. I remember that sniffing the heavy, plasticky pages of brand new school textbooks was particularly enjoyable (much to the bemusement of my teachers).

Perhaps even more comforting than the smell of new books is the sweet, musty scent of old ones, best experienced in a library or attic stuffed with forgotten, dusty tomes.

Like with a new book, the materials that make up the pages are responsible for the smell, but this time it is the degradation of the natural polymers in the paper – cellulose and lignin – that have the greatest effect. Lignin – the ‘woody’ component of plant cells – gradually oxidises and becomes less stable when it is exposed to air and sunlight. This process causes the lignin itself to darken, which is responsible for the characteristic yellowing of old paper, and also produces acids that attack the cellulose, hydrolysing the bonds between its sugar building blocks. It is these reactions that release sweet-smelling compounds such as ethyl benzene and vanillin that contribute to the overall smell. Again, like new books the aroma varies depending on the precise chemical makeup of the paper, as well as the age of the book. Thicker, lower quality papers typically have a high lignin content, so they will get yellower, and smellier, with time.

Some attempts have been made to untangle the complexities of the old book aroma. In 2009 a team at University College London in the UK analysed the volatiles given off historical papers from the 19th and early 20th centuries and came up with a list of 15 markers that they said could be used to help assess the age and condition of historical works without having to take samples.

And at least one perfumer has attempted to bottle it. Last year US-based company Demeter released an eau de paperback that it claims can conjure up a trip to the library. The fragrance combines the smell of ageing paper with ‘a sprinkling of violets and a dash of tasteful potpourri’. Perhaps, as we enter an era of the ubiquitous e-reader, it will help Kindle fans recapture the traditional reading experience. For me, though, it’s a step too far. While I like the smell of old books, I’m not sure I’d want to douse myself in its concentrated liquid form. If they make a textbook version, however, I might just reconsider!