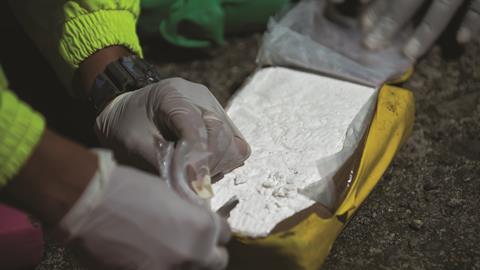 The great Danish coke off

If the same recipe is used by different chefs, will you get the same result? Professional chefs, amateur kitchen warriors and fans of The Great British Bake Off know the answer – no. There’s another set of people that know this to be true – chemists. Getting consistent results takes a lot of work. One has to control for reactants and reagents, instrumentation, personnel training, process adherence, storage… the list goes on. Trifle or triflate, a specific user can control a recipe’s result to such an extent it could point to a particular individual. The same goes for illegal chemists, their recipes and the clandestine drugs they produce.

Cocaine is an alkaloid drug extracted from coca plants. The United Nations Office on Drugs and Crime stated in the World drug report 2017 that 1125 tonnes of it were produced worldwide in 2015, of which a record level – 864 tons – was seized by authorities. The Danish state police is one agency that’s proved particularly successful. In 2013, and twice in 2015, the politet uncovered numerous bricks of similar dimensions and wrappings found in containers shipped from South America, each stamped with the same logo. Were they from the same manufacturer, branding its illicit product? That’s what Denmark’s Aarhus University researchers sought to find out when they analysed 220 cocaine bricks from the trio of seizures.1

Researchers found that the bricks were of similar purity, with 136 bricks containing the same adulterant: levamisole. A veterinary drug used to combat parasitic worms, levamisole in cocaine is a compounding public health issue given its effects on humans – agranulocytosis (low white blood cells), arthralgia (joint stiffness), retiform purpura (a type of skin lesion), and skin necrosis. But levamisole as an adulterant does not point to a particular cocaine manufacturer – it’s an incredibly popular cutting agent (diluent) used in cocaine production, the illicit equivalent of finding vanilla in buttercream frosting.

The researchers therefore chased down two other leads – the bricks’ profile of alkaloids (cocaine is not the only alkaloid in a coca plant) and residual solvents used in their manufacture. These clues create an individual signature, and could potentially connect seizures and provide a path to the point of origin. To see if such a path could be revealed, the team got to the heart of the matter. Well, the centre of each cocaine brick.

Of the 198 cocaine bricks moving on for an additional analysis (22 cocaine bricks were returned to the police in their original wrapping), the exterior of each brick was bypassed ‘…to avoid any potential decomposition of the chemical profile on the exterior’. Each sample was ground using a pestle and mortar to ensure particle uniformity, and one randomly selected brick was sampled 10 times ‘in order to confirm homogeneity across a brick’. All prepared samples were tested using gas chromatography–mass spectrometry. The alkaloid and residual solvent profiles within each of the three seizures were examined and compared with the analytical results of 124 random smaller cocaine seizures in Denmark between 2012 and 2015.

To nail down similarities and differences, researchers used principal component analysis (PCA). This enabled them to observe the ‘distribution of the chemical profiles from the three large seizures relative to the general profile distribution for random seizures’. The results of the smaller seizures were scattered across the plot – none of them appeared to be linked to the major hauls.

The Aarhus team don’t go quite that far, noting that it’s important to use caution and other case clues. While the drugs ‘may originate from different production batches made by the same manufacturer’, the findings ‘may very well reflect the production process by which illicit cocaine is commonly manufactured’. While the results suggest the same solvent mixture was used or reused with different batches of coca paste or base, ‘different manufactures could possibly share the same organic solvent mixture’. As with levamisole as a cutting agent or vanilla in buttercream frosting, recipes, ingredients, tips and tricks get shared – across kitchens, labs, and clandestine operations.