The poisonous presents that defined the US legal system

One of the most influential decisions in American jurisprudence began in December 1898 with an odd Christmas gift: a bottle of Emerson’s Bromo-Seltzer, a popular over-the-counter medicine. The box had been wrapped in manila paper, sealed with wax, and addressed to one Harry Cornish, a director at the Knickerbocker Athletic Club in New York, one of the first American football teams. Inside, Cornish found the bottle in a silver holder, encased in the distinctive robin-egg blue of Tiffany & Co. The sender was a mystery, but Cornish thought nothing of it – he often got presents that way.

Cornish took the present to his room, where he resided with his aunt, Katherine Adams, and Adams’ daughter and son-in-law. The family seems to have enjoyed a quiet Christmas. Their peace would not last into the new year. 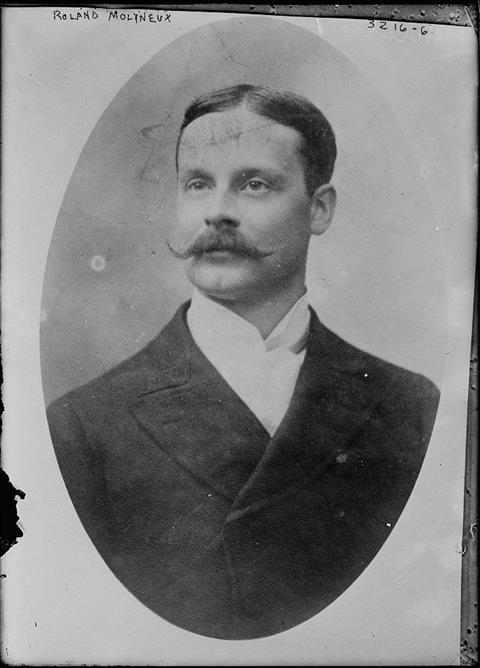 Were Roland Molineux’s ‘medicine’ gifts as lethal as his magnificent facial hair?

On the morning of 28 December 1898, Adams woke with a headache and the gifted Bromo-Seltzer was put to use. Minutes after ingestion, Adams fell violently ill and was in severe pain. A doctor, Edward Hitchcock, was called, but while waiting for him to arrive Cornish also tried the gifted Bromo-Seltzer and became ill. Hitchcock treated the patients, but also smelled and tasted the now-suspect Bromo-Seltzer. He would later report that he smelled ‘the characteristic odour of the cyanogen group’ – almonds – and reported a metallic taste. Soon, Hitchcock also fell ill and another doctor had to be called. Hitchcock and Cornish both survived; Adams died. Her autopsy, and testing of the Bromo-Seltzer, confirmed Hitchcock’s suspicions: the medicine contained cyanide.

It was clear Adams’ murder was a mistake – the intended victim was Cornish. But who wanted him dead? A day after his aunt’s death, Cornish is reported as saying ‘he cannot think who can have had any design on his life.’ Soon enough, however, a chief suspect bubbled to the top: disgruntled former Knickerbocker Athletic Club member and chemist Roland Molineux.

Born into a family of position and privilege, Molineux was the son of General Edward Leslie Molineux, a famous general who fought for the Union in the American civil war. As a young man, Molineux studied chemistry at Brooklyn Polytechnic Institute and then worked for dye manufacturer Morris Herrmann & Company in New Jersey. Investigators determined that Molineux had access to a plethora of poisons – including cyanides – through his workplace. As for motive, it came back to the Knickerbocker Athletic Club, where Cornish and Molineux had become embroiled in a feud.

Investigators showed it possible by location and timing that Molineux could have posted the poisonous package, and handwriting experts agreed the label had been written by Molineux. Through his account at Tiffany & Co., Molineux was shown to have made a purchase in December that could have afforded him such a box as was sent to Cornish. These circumstantial evidentiary threads, and more besides, seemed to be coming together – but it was a second murder linked with the Knickerbocker Athletic Club that pointed the finger squarely at Molineux.

Roughly six weeks prior to Adams’ death, Knickerbocker member Henry Barnet had died in his room at the club. Barnet had taken ill in late October and, until his death in November, was under the care of Dr Henry Beaman Douglas. At first, Douglas noted the cause of death as ‘weakness of the heart caused by diphtheria’. He would soon change his mind. Prior to his death, Barnet had told the doctor he’d received a box of Kutnow’s powder – marketed as a laxative – anonymously by post. Douglas sent the medicine off for testing: it contained cyanide of mercury (mercury(II) cyanide). Barnet’s autopsy confirmed he had been poisoned too.

Yet again, the evidence pointed to Molineux. A few weeks after Barnet’s death, Molineux had married a woman reported courted by Barnet prior to his illness. While the veracity of this supposed love triangle as a motive was the subject of much debate at the time, it certainly made for salacious media coverage. Another link between these two murder-by-mail plots was the handwriting: once again, experts confirmed that Molineux had written the Barnet label. Soon, Molineux was arrested and charged – but only for Adams’ murder.

Although the trial was focused on the Adams case, Barnet’s demise and the links between the two cases played a prominent role in the prosecution’s case. But the links and evidence were up for interpretation and debate. The defence lawyer, confident that he had poked enough holes in the prosecution’s case, did not present any evidence, instead arguing ‘that the prosecution had failed to establish its charge and immediately began his closing argument’. upon the prosecution wrapping up its presentation. It didn’t work: on 10 February 1900, Molineux was found guilty and sentenced to death.

But Molineux was not executed. The case went to the New York Court of Appeals, which reversed his conviction in June 1901 on a simple basis: evidence of other crimes is not admissible in court. Molineux had been indicted for the murder of Adams, not Barnet, while linking the cases made it easier to believe Molineux was a murderer, there wasn’t enough proof to show he had murdered Adams. The court made it clear that their decision was a general rule of evidence that dated from the Magna Carta in the 13th century. Old or not, it became known as the Molineux Rule.

Molineux was tried again in the fall of 1901 – this time without any mention of Barnet. Molineux’s new defence team had a very different strategy to the first trial, putting forth their own witnesses – including Molineux – to dispute nearly every point of the prosecution’s case. The verdict came after less than an hour of deliberation: not guilty.

In the nearly 120 years since the New York Court of Appeal’s ruling, the evidence forbidden and allowed by The Molineux Rule has been tested, expanded, contracted, relied upon and argued over. Thanks to its impact on the American legal system, dramatic turns, and poisonous edge, the Molineux case continues to fascinate. It is featured in Deborah Blum’s The Poisoner’s Handbook and the complicated tale of Roland Molineux takes centre stage in Harold Schechter’s The Devil’s Gentleman. These two books, though full of poisons, are safe holiday gifts.