An explosion is the sudden release of gas, creating a sonic report 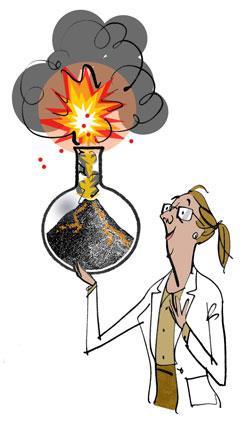 A hot liquid, when poured into a cold one, may boil the cold one and cause a ’fuel-coolant’ explosion. This is why you should never pour molten iron into a wet crucible - the sudden explosion of steam may throw molten iron dangerously about.

The biggest explosion in history, the Krakatoa volcanic eruption of 1883, is suggested to have been a huge fuel-coolant explosion. It happened when several cubic miles of molten lava entered the sea. The final explosion was so powerful that it ruptured sailors’ eardrums and sent the pressure meters at Jakarta gas works (100 miles away) off the scale.

The reaction of sodium with water is usually more modest. It is a chemical reaction:
2Na + 2H2O

2NaOH + H2
It liberates hydrogen and heat. Chemical textbooks advise the demonstrator to put a tiny lump of sodium, say 0.5 grams, on water. The metal rushes about on the water surface, rapidly dissolving and evolving hydrogen gas. That gas may even inflame.

You should not try a bigger piece of sodium (5g or more) as it can explode. This may be the evolved hydrogen igniting in the air; though an intrepid chemist who has tried it, former director of the Science Musem in London Sherwood Taylor, says that the bang does not sound like a gas explosion.

The metal potassium is even more vigorous and has a lower melting point too. Several unexpected explosions have occurred during its reaction with water and yet Faraday used it as a test for water in his famous lectures on The chemical history of a candle  (for a review of the latest edition of the book detailing these lectures, of this issue, Ed.). I suspect that potassium, being certain to inflame if even a small piece touches water, made better lecture demonstrations than sodium.

Even so, a big enough chunk of sodium, thrown into water from a safe distance, should explode. A quick search on YouTube should illustrate the general principle and some bold reader may have already uploaded their attempts. Explosions are always fun!

My study of old chemistry textbooks has turned up another potential fuel-coolant explosion. The British chemist and historian James Partington described a splendid chemical explosion. He noted that an alloy of sodium and potassium is liquid at room temperature. Put a small amount of the liquid alloy in a test tube, said Partington, and cover it with chloroform or carbon tetrachloride. Wait 15 seconds, and then drop the test tube. When it hits the floor it explodes, liberating sodium and potassium chlorides and black carbon.

4NaCl + C.
It will be going on anyway but when you drop the tube, the sudden shock must stir the liquid alloy into the halocarbon. This accelerates the reaction into a fuel-coolant explosion. Again, I can imagine ways of doing it on a larger scale, and getting a bigger bang!

I like chemical fun, and scorn the deadening influence of modern health and safety regulations. But my fantasies of rivalling Krakatoa would strain the resources of the entire chemical industry!