Electrochemistry has revolutionised the chemical art

Electrochemistry has revolutionised the chemical art. By passing current through molten salts, Humphrey Davy discovered the alkali metals; electrolysis pioneers William Nicholson and Anthony Carlisle, followed by August von Hoffmann, split water into hydrogen and oxygen; and a whole new branch of industry resulted when shiny metals such as nickel and chromium were plated onto some base electrode.

But to get that current in and out of solution or liquid, you need electrodes; and as so often, this practical technology introduces engineering wrinkles that baffle the pure chemist. Consider a positive metal ion neutralised at a negative electrode: it gains an electron, and becomes an atom: M+ becomes M, and plates out. But intriguingly, the plating of metal often gives a coating under ferocious stress. Various organic species (such as sugar) may have to be added to the solution to give the bright dense plating that you want. 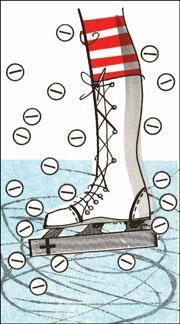 Matters are even more puzzling at the opposite electrode. Here, some negative ion discards its electron and becomes a radical. For example, Cl- becomes Cl?, which either attacks the electrode or combines with another Cl?to form Cl2. The most interesting ion of them all is probably OH-, which loses an electron to form the fierce radical OH?. This deadly species probably attacks the metal of the electrode, although it may combine with another OH? to form H2O2, hydrogen peroxide (this medicament and rocket fuel is largely made electrolytically). Other radicals are less terrifying. Adolf Kolbe - the first chemist to apply electrolysis to organic synthesis - electrolysed acetates: here, the CH3COO- ion, for example, discharges to give CH3COO?, which splits off CO2 to form the radical CH3?. This need not attack the electrode on which it was created. It hangs around long enough to combine with another similar radical, giving ethane, C2H6.

I have long wanted to conduct electrolytic experiments without the intruding complications of electrodes. The idea would be to deprive radicals of the easy option of attacking the electrode on which they were created, forcing them to attack whatever was in the solution. Replacing a negative electrode is not difficult: I can easily imagine using a beam of electrons fired at a liquid. What about a positive electrode which would refuse radicals but accept electrons? It’s a trickier proposition, yet I can imagine a way out. Any structure made of atoms, whether a molecule or a radical, has great difficulty getting through a gas (which is why distillation is such a splendid purifier) or through a solid film (which is why containers work). But electrons are much smaller. They can often get though a gas (hence the neon tube) or a solid (as in metallic electrodes). So how about making a metallic electrode very hot or cold? A very hot one would get covered in a thin layer of steam (this is film boiling, and is why a water droplet zooms about on a hotplate). A cold one would acquire a thin coating of ice. With luck, such an electrode would accept electrons but not molecules or radicals.

Now a high concentration of radicals could initiate some powerful chemistry. I like the idea of using radicals to attack and dissolve organic waste. Some twenty years ago, chemists working at the nuclear reactors at Dounreay, Scotland, used electrolysis to generate a wildly active silver ion - if you dumped low-level radioactive waste (for example, old laboratory coats) in the liquid, they got attacked and dissolved. With electrodeless electrolysis you’d be able to dump organic matter in an aqueous liquid and dissolve it electrically. You would not need to generate enough radicals to burn the rubbish (to CO2 and H2O). A little radical-attack, attaching polar groups to each organic molecule, would make it water-soluble. Then you could simply flush it away!