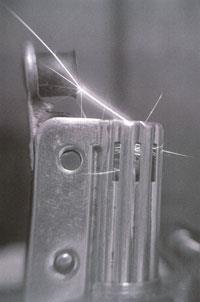 Many tens of millions of chemical solids are known; so there are billions of combinations for us to try striking together in the hope of getting a spark. And yet I only know three sparkers. They are the metals iron, titanium, and cerium, which spark when struck against a material of higher melting point - such as a grinding wheel, a lighter wheel, or the silica in flint.

The old flint-and-steel device, as perfected in the many millions of ’chuck-a-mucks’ carried in 18th century pockets, was generally used to light a pipe. The modern gas lighter uses a ’flint’ which is actually the metal part of the sparking duo. It is an alloy of iron and cerium, and is pressed against a high melting point serrated wheel by a little spring. When you flick the lighter, it briefly turns that wheel. The sudden relative movement of wheel against metallic ’flint’ generates sparks. These light the gas which is emitted at that moment from the lighter’s store of pressurised liquid fuel.

We often make sparks accidentally, usually while working with that common sparker iron, or its alloys. Indeed, an iron alloy held against a spinning grindstone emits a copious shower of sparks.

The flint-and-steel gadget is chemically rather subtle. Steel is, of course, an alloy of iron and carbon; and I reckon it is the iron that matters. When you strike flint against steel, the energy of the blow is all concentrated at the point of impact. The flint, with its high melting point, remains rigid; but a little bit of the steel gets hot enough to become plastic, to get detached, and be thrown off.

This bit of hot steel is very small, and has a vast surface area for its volume. So as it flies through the air, and oxidises in it, the energy of oxidation raises its temperature even more. In a few milliseconds it gets hot enough to glow, and appears to the eye as a spark. In fact that little bit of flying metal acts as a temperature amplifier. With luck it can be caught on a piece of tinder, which it may inflame.

Only three metals can act as temperature amplifiers: iron, titanium and cerium. No other materials will spark on a grindstone (I have asked many engineers). The champion is undoubtedly cerium. Those ’flints’ for the modern gas lighter are an alloy of about 70 per cent iron and 30 per cent cerium - ’Auer metal’. The name comes from Carl Auer von Welsbach (1858-1929), a student of Robert Bunsen who went on to invent the gas mantle. To make his gas mantles he had to buy lots of thorium. It had cerium as an impurity. What to do with the surplus cerium? He devised this unique application.

I do not know what is special about iron, titanium and cerium. Maybe the oxide layer that forms on the metallic surface is highly permeable to entering oxygen, so that the hot metal can oxidise at a great rate. This guess ties in with the other sparker, carbon, whose oxides are gases. A bit of hot carbon thrown through the air must expose its solid surface directly to that air. So it should oxidise even faster. (Against this notion, I have failed to get sparks from a carbon rod held against a grindstone.)

The carbon spark is even mentioned in the Bible. Job bewails that ’man is born unto trouble as the sparks fly upwards’, suggesting that the writer had seen many sparks flying upwards from his fire. The sparks made by fire, like those of most fireworks, must be bits of hot carbon thrown through the air, oxidising as they go, and glowing from the heat of oxidation.

I have never seen sparks mentioned in any chemical textbook; but they still matter. Fire is the quintessential human technical invention, from which all others flow. And we still make it in the old way, by exploiting metal sparks as temperature amplifiers.