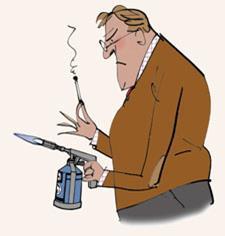 In my strange chemical career, I have had to devise many chemical demonstrations for television. They had to be dramatic and quick: explosions and ignitions were always good. Furthermore, they had to be right. It is easy enough to ’fiddle’ a demonstration - clever editing, solutions which are not what the presenter claims, cunning camera shots to concentrate on the result you want - all these can make almost anything look feasible to the naive viewer. But the honour of the craft has to be maintained. Scientific demonstrations have to be true, as well as believable. Almost all of mine were.

Yet on one occasion I had to fiddle a result. One of the greatest of chemical inventions was the friction match. Strike a match on the box, and it flares into fire. This was a wonderful new way of making fire, which previously had to be made trickily and tediously with flint and steel. Matches grew rapidly into a vast industry.

The popularity of smoking meant that almost everyone wanted a box of matches in some pocket.

Friction matches were first made and sold by a pharmacist, John Walker of Stockton-on-Tees, UK, in 1826. Researchers for the Screenhouse company which made Local heroes (a television programme of the 1990s) got me the recipe, and asked me to reproduce those first matches. I did so, and found that they did not work! The head of Walker’s match was allegedly made by mixing a paste from antimony sulfide, potassium chlorate, powdered glass, gum arabic and water, smearing that paste onto a wooden splint, and letting it dry. When the dry head was drawn forcefully through a folded piece of sandpaper, the match inflamed.

I could not get this to work. First I used red antimony sulfide; then I tried black antimony sulfide (that’s the rhombic modification). That failed too. I replaced the gum arabic with an emulsion of polyvinyl acetate; this gave a firmer head but the match still did not ignite.

Meanwhile, Screenhouse was getting restive. Finally I cheated, and made a paste containing about 50 per cent of modern ’strike anywhere’ match-head material.

The resulting ’friction lights’ then worked.

Later I learnt that Walker had declined to patent his epoch-making invention. As a result, many later inventors patented match mixtures, all of which contained phosphorus. My suspicion is that Walker’s matches contained phosphorus too, but he preferred to keep this a secret rather than reveal it in a patent specification. Now phosphorus (and those early matches would have used the yellow allotrope) makes a match dangerous. A whole box could be set off by a blow, and yellow phosphorus could cause disease in match workers. Indeed, one of the cleverest of chemical developments in the whole match business was the shift from phosphorus to phosphorus sulfide, P4S3. This was much safer for workers and purchasers, and still gave good ’friction lights’ with a low ignition temperature.

Incidentally, Walker’s composition included powdered glass, presumably to increase the frictional heating when the match was struck. Now powdered glass has been alleged to be poisonous. In Under Milk Wood, Dylan Thomas makes the poison-fanatic Mr Pugh ’remember ground glass’. George Orwell has claimed that many Indians have tried to poison people with powdered glass, ’with disappointing results’. So what was the stuff doing in Walker’s pharmacy in Stockton-on-Tees? Anyway, I crushed up some glass which I included in the fiddled mixture. In front of the camera, everything worked.

When Adam Hart-Davis struck my matches with his bit of folded sandpaper, they duly lit. The viewer saw the principle. But I knew that  the mighty match industry had started in a trickier way.