The value of the failed experiment 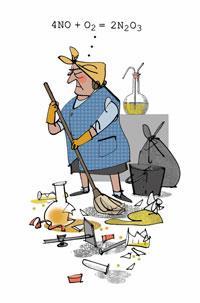 Chemistry grew slowly out of alchemy; and I sense that the growth had two main strands. The first was a mighty development of theory, celebrated in great names like Lavoisier and Dalton. The second was the slow improvement of practice. Thus we all know about distillation, which alchemists devised in about 1000AD. We know about crystallisation too. I do not know who first intuited that crystals were somehow chemically ’purer’ than the stuff you started with. Yet (like sharpness of melting point) crystallisation is intimately connected with the crucial modern notion of chemical purity. These days, it is taught to all budding chemists; getting good crystals is one of the great practical chemical arts.

Some scientists are very bad at the practical arts, yet shine in the theory. The mighty theoretician Wolfgang Pauli was such a bad experimenter that he reckoned he could wreck any experiment merely by entering the laboratory and James Franck once claimed that his vacuum apparatus had imploded just because Pauli’s train had momentarily stopped at a local station. Albert Einstein also never did a noteworthy experiment. Indeed, he claimed not to have heard of the great Michelson-Morley experiment on the velocity of light, which so underpinned his theory of relativity.

Chemistry has benefited from both types of scientists. Lavoisier seems to have been a polished experimenter, as well as a mighty theoretician. But Dalton, though always a commanding theoretician, may not have been outstanding as an experimenter. One of his challenges (and indeed a major challenge for the whole of chemistry around 1800), was the nature and composition of air.

whereas in the wet:

The N2O3 dissolved in the water. The experiment got Dalton thinking about his famous ’Law of Multiple Proportions’, one of the most powerful proofs of his atomic theory. It asserts that if an element (in this case nitrogen) reacts with another (in this case oxygen) to form two compounds, then the amount by weight of the element in one of the compounds bears a simple whole number ratio to its amount by weight in the other.

Sadly, the whole experiment is a mess: N2O3 is not a stable or isolable gas. The experiment may have started Dalton thinking about multiple proportions but in the end he gave it up. Dalton wisely decided that the whole experiment was simply not convincing. He left it out of his famous book of 1808, A New System of Chemical Philosophy. Instead, he illustrated his Law of Multiple Proportions with ’olefiant gas’ (ethene, C2H4) and ’carburetted hydrogen’ (methane, CH4), both of which are isolable and stable. When Gay-Lussac repeated the experiment in 1816, he helped things along by dissolving his alleged N2O3 in a solution of alkali; but even then he got no convincing quantitative result.

This piece of chemical history makes me look more kindly on sloppy experiments. Even if a good experimenter would immediately detect and reject one, and would refuse to waste time on it, the mess might have some value. It might inspire a theoretician!