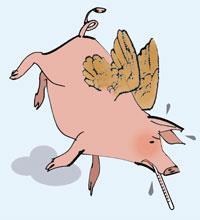 There’s been lot of oinking and squawking over recent scares about swine flu and bird flu. Should they really have been classed as pandemics? Were the World Health Organization (WHO)’s advisers paid by the pharmaceutical industry to encourage governments to stock up on antiviral drugs? Do Tamiflu and Relenza even work?

But enough of the conspiracy theories. Influenza - be it swine, bird or plain old human - is a serious disease that kills thousands of people around the world every year. Unfortunately, because it’s caused by a virus that mutates very rapidly, finding a simple cure for all the different variations is not a simple task, which is why hundreds of people work tirelessly to predict which strains of human flu virus are going to be the most virulent each year. Their efforts are condensed into the seasonal vaccines.

That’s where pigs and birds can throw a spanner in the works. Every now and then, a new variant of flu will burst onto the scene, jumping the species barrier.

While it’s very easy to refer to ’bird flu’ or ’swine flu’, one thing that became much clearer to a lot of people in last year’s pandemic is that most virulent strains of flu are some mixture of bird, swine and human flu. John Oxford, professor of virology at Queen Mary University of London, UK, and one of the nation’s leading flu experts, believes that flu strains that cause pandemics are most likely to arise in places where poultry, pigs and humans are all kept together in close quarters. Maybe the ideal killer flu breeding ground would be some kind of chimeric half-pig, half-chicken - luckily the genetic engineers haven’t quite got that far yet, but the thought of a drumstick with crackling is quite enticing...

If a pig-chicken hybrid is the enemy, then our saviour is possibly the humble ferret. No longer are these sleek mammals restricted to being put down the trousers of Yorkshiremen for entertainment purposes; they are the principal model species for scientists studying the transmission of human flu. Keeping an eye on how well new strains of flu pass between ferrets should give us a good idea how well they will transfer between humans.

So chemically speaking, what’s the difference between different strains of flu? Strains are broadly classified by two proteins that are found on the surface of virus particles - haemagglutinin and neuraminidase.

There are several known types of each protein, so for example the 2009 pandemic swine flu strain is a form of H1N1, whereas the recent bird flu is an H5N1 strain.

But even within this classification, different years’ strains can be distinctive enough to foil the immune system. One of the biggest differences comes down to sugars. The carbohydrates attached to both viral and host proteins can radically alter how infectious a strain is and whether you end up with a sniffle or laid up for a month.

The 2009 H1N1 is very infectious, but because it binds to sugars found mostly in the nose and throat, it doesn’t tend to cause such serious symptoms as H5N1, which binds to sugars found much deeper in the lungs. Fortunately, H5N1 is not (yet) anywhere near as infectious as H1N1, but it may only be a matter of time before it gets rejigged enough to take over the world.

Perhaps by the time the next flu pandemic comes around, we might be properly prepared to fight it off. But then again, pigs might fly.