The price of failure

Research is not straightforward, but its ups and downs will teach you a lot

It was snowy afternoon in January 2015, and I was going home after a chemistry tutoring session in Bucharest, Romania. Just before I entered the underground station, I received a call: I had received a scholarship to start my PhD at the University of Manchester, UK that September. Of course, I was excited about the chance of doing research every day. Naïvely, I thought I would have plenty of results. Little did I know that in pursuing the unknown there are many things that do not work.

Chemistry is about pushing through downfalls and frustrations to get to a short (but extremely happy) moment when you make the desired compound, often after months of trial. And that’s only the beginning – then you are faced with other challenges, such as purification, crystallisation, scaling up… 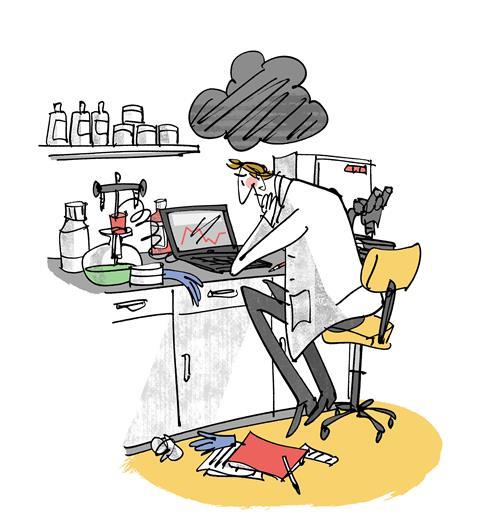 My PhD involved a lot of crystallography, so I’ve experienced many ‘failures’ associated with collecting crystallographic data. From not collecting enough data, running out of liquid nitrogen during an experiment, machine failures or crystal falling, if you can name it, I’ve experienced it. The cherry on top of this gateaux of disasters was when I stayed late to set up a repeat of a special variable temperature experiment, only to come in the next day and see that it had failed moments after I went home. These were the moments when I felt that I wanted to give up.

I don’t want to scare any student by sharing these experiences. Yes, it’s normal to be sad after investing energy and time into something that did not work or failed for a certain reason. You just need to shake it off and get back at it again. My advice would be to speak with people around you about the frustrations you have. Everybody doing research has felt the same at some point: you are not alone. Ask them about their frustrations and you will get examples of similar if not worse experiences. They, too, had a lot of failures in the laboratory. They will encourage you. Their and your passion for the subject and sense of purpose will help keep you going. And the soft skills that you will gain in building your endurance to failure and uncertainty will help you a great deal in life, no matter what path you ultimately choose to follow.

If I knew what I know now on that cold day in Bucharest, I would still choose to do a PhD. I have grown tremendously. Yes, there were hard times, but the joy and excitement from succeeding in doing what I proposed after so many failures is incomparable. If I could speak to my younger self, I would just let him know that research is going to be a hard journey that’s full of lessons – but it’s all worth it in the end.