The spirit of the matter

Philip Ball muses on the mercurial nature of chemical history

De diversis artibus, a treatise written in the 12th century by a German Benedictine monk named Theophilus, is a remarkable recipe book.

It is sometimes regarded as part of the tradition of craft manuals extending back to Greek and Roman times, which give instructions for making all kinds of materials, particularly pigments, coloured glass and other substances for decorative arts. Many of these recipe collections, such as the ninth century Mappae clavicula and 10th century De coloribus et artibus Romanorum, were copied compilations of other sources, but Theophilus’ book is different. As its modern translators John Hawthorne and Cyril Stanley Smith say, it stands apart because ‘Theophilus wrote directly from his own experience … and from intimate observation and critical enquiry of his fellow artisans’. 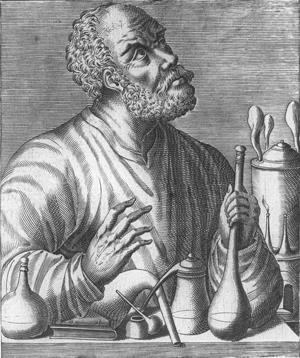 Did Jabr ibn Hayyan's alchemy deal in chemicals, or concepts?

Moreover, his audience was not a closed circle of alchemical adepts – he was delivering practical instruction for anyone who read it. ‘His treatise,’ Hawthorne and Smith say, ‘had a down-to-earth quality that makes it far superior to any other technological manuscript for some centuries to come.’

Take his recipe for ‘cinnabar’ – synthetic mercury sulfide, later known as vermilion. He explains how to mix sulfur and mercury in a pot and heat them until they combine to make the red compound. It’s a no-nonsense description, except for one curious thing: Theophilus gets the quantities wrong. One part sulfur to two parts mercury by weight is far too much sulfur! How could this escape his careful observation? Spike Bucklow of the Hamilton Kerr Institute, the conservation department of the Fitzwilliam Museum in Cambridge, argues that this discrepancy betrays the recipe’s alchemical origins, where a 1:2 ratio fitted the Islamic alchemist Jabir ibn Hayyan’s ideas about combining sulfur and mercury to make gold. Perhaps even Theophilus felt he should trust theory over experience (ever made that mistake?).

Jabir decided that all metals are composed of sulfur and mercury, but that only in gold are they united in perfect proportions and purity. If so, that must have given vermilion and cinnabar a special status – all the more since these materials have the red colour that was not only the tinge of the most prized gold but also allegedly the hue of the Philosopher’s stone that could catalyse the transmutation of metals. The symbolism made perfect sense to the medieval mind: hot, fiery ‘male’ sulfur wedded with cool, watery ‘female’ mercury. What could seem a more natural and perfect alchemical marriage?

So did vermilion-makers think they might actually be making the Philosopher’s stone? When I give talks about colour-making chemistry, I have always taken care to disabuse audiences of that idea. Jabir’s Sulfur and Mercury are subtle, intangible ‘principles’, I say, and not the same thing as the earthly elements extracted from the ground. ‘Alchemists said that sulfur is not Sulfur and mercury is not Mercury,’ warns Bucklow – so vermilion ‘is a poor “material copy” of a “spiritual pattern.”’

Yet it seems this caveat might be unnecessary. In a paper in Ambix, historian of chemistry William Newman of Indiana University challenges the common view that the Jabirian constituents of metals were ‘spiritual’ substances that could not be isolated in the laboratory.

It’s not clear where this idea came from, Newman says, but the alchemical literature doesn’t support it. For example, when the 11th century Persian Avicenna writes of sulfur and mercury as the components of all metals, his account of their properties evidently refers to the tangible materials. There are clean and dirty (pure and impure) sulfurs and mercuries, he says, but only the most pure will combine to make gold. Avicenna doubts that human skill is adequate to make them, but other Islamic sources give recipes.

The same applies to an account in a classic book on minerals by the 13th century German friar Albertus Magnus. He argues that the sulfur and mercury present in metals are themselves mixtures of two components with different volatility, and can be refined by laboratory techniques such as distillation. In other words, there was nothing abstract about Jabir’s principles: you could do chemistry with them.

Quite how all this worked was closely bound up with the issue of whether substances retained their identity when combined in compounds or ‘mixts’: a question ultimately central to the emergence of an atomistic view of matter. Certainly, belief in the transmutation of metals seems perfectly reasonable if they are thought to be a kind of compound.

Perhaps what this debate shows most clearly is the danger of interpreting what the words used by pre-modern technologists and natural philosophers actually meant to them: one need only think of the various connotations that ‘spirit’ and ‘ether’ have acquired. The inevitable corollary is that words and concepts that seem clear to us today (element? bond?) might well fox our descendants.