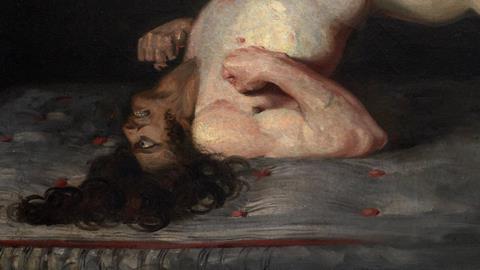 William Taylor was dead and buried… but murder will out

Christmas 1888 was a dark time on the Eastern Shore of Virginia, US. A flat, sandy strip of land braced by the Atlantic and separated from the rest of the state by the chill waters of the Chesapeake Bay, the close community had been shocked by the death of farmer William Taylor. Now, less than a week after his burial, the local doctor, John Bowdoin, had ordered the body disinterred. Worse, rumours had begun to spread that the victim’s wife, Virginia Taylor, had been responsible for her husband’s untimely end.

Taylor’s death had been slow and agonising. The farmer had been racked with a series of ‘…convulsions that rendered his limbs rigid, bent his body in the shape of a bow so that only his head and heels would touch the bed, and caused foam to issue from between his clenched teeth’.1 He had died three days after the first seizure, and the body quickly buried. Yet Bowdoin felt there were too many unanswered questions and wanted an autopsy.

Bowdoin knew there were two likely causes of Taylor’s symptoms.2 The first was tetanus. This would have been caused by exposure to tetanospasmin, a toxic protein produced by Clostridium tetani* and often referred to as ‘tetanus toxin’(TeNT).3,4,5 A death from tetanus was not necessarily suspicious; in 1884, Arthur Nicolaier induced tetanus in laboratory animals using soil bacilli, and Taylor could have been exposed while working his farm.5,6

The second possible cause was strychnine, a poison that a farm such as Taylor’s might have on hand to control pests. Strychnine and TeNT cause glycine-mediated nerve cell inhibition, albeit in different ways.7 Strychnine prevents the binding of glycine to a receptor in the spinal cord, while TeNT prevents the release of glycine (and also the release of GABA, another neurotransmitter). Both result in painful and possibly deadly muscle contractions, although a careful doctor can differentiate between the two by taking into account the onset, duration and exact manifestation of the contractions. Bowdoin thought the cause of death was strychnine.7 The locals agreed – and gossip began to name Virginia Taylor as the poisoner.1

Virginia Taylor had not behaved as others thought she should during her husband’s illness or upon his death. She was reported to have shown ‘little concern’ during the three days of her husband’s illness, and when he died ‘she evidenced no sorrow’.1 A neighbour helping with Taylor’s care reported that his wife gave him ‘a glass containing considerable quantity of some white substance’ shortly before his last bout of convulsions.1 Virginia Taylor claimed the glass was sweetened medicine;6 Bowdoin retorted that his medicine required no sugar. During William’s final attack, the neighbour wanted to call for Bowdoin, while ‘…Mrs Taylor said the doctor could do him no good’.

The circumstantial evidence continued to mount. There was the fact that Virginia had tried to block the exhumation (‘she did not want to see [Taylor] cut up’),8 even though it meant forfeiting a $2000 insurance payout (worth around $55,000 [£44,000] today). There were alleged ‘improper relations’ between Virginia and a farm employee called James Dix.1 A local store owner went on record saying he sold Virginia strychnine about two months before William’s death. Knowing of unrest in the marriage, the store owner supposedly ‘told [Virginia] not to kill Bill Taylor; it would be better to leave him’.2 Virginia denied this version of events, saying she purchased the strychnine to kill rats at the farm. Few believed her.

Witness statements and innuendo landed Virginia in jail on Christmas Day, but authorities knew it would take more to keep her there. The exhumation went ahead and Taylor’s stomach and liver were sent to the Virginia state assayer and chemist, William H. Taylor (no relation).9 The chemist’s testimony would prove critical to Virginia Taylor’s trial – so much so that it was postponed until March to allow him to complete his analysis.10

The official report simply states that ‘all three of the usual tests’ were employed, so the exact methods are unknown. However, tests for strychnine at the time all employed a similar reagent – a metal compound in a sulfuric acid solution – and we can guess the most likely candidates.11 A common test was to use potassium dichromate in sulfuric acid (chromic acid test). A positive result for strychnine produced a rainbow of colours (blue, purple, red then finally orange),11 signalling changes in chromium’s oxidation state. However, in 1883 the chromic acid test had been surpassed by one designed by German pharmacologist Karl Friedrich Mandelin,12,13 which offered better reagent stability, lower detection limits and fewer false positives.14,15 Like the chromic acid test, Mandelin’s test produced a rainbow of colours upon exposure to strychnine as the oxidation state of vanadium changed: starting with blue and progressing to vermilion (some reports suggest yellow). Finally, an assay of potassium ferrocyanide in sulfuric acid would have been a good choice to perform; this precipitates strychnine and would have allowed for its quantitation.

This use of multiple tests was not excessive. Each has its false positives and interferents, and the multiple, well-studied tests likely allowed the state assayer to call the case beyond doubt: William Taylor had died of strychnine poisoning.

Virginia Taylor’s trial lasted four days. The judge instructed the jury to weigh all evidence carefully and to consider the charges of either first or second degree murder, along with voluntary or involuntary manslaughter.16,17,18 The jury found Taylor guilty of second-degree murder and the judge sentenced her to five years in prison.

Yet three months later the verdict was overturned. The judge had made a mistake.19 Given that the State charged Virginia with ‘killing by poison’, the ‘jury should either have found Mrs Taylor guilty of murder in the first degree or have acquitted her’. The decision also meant she could never be charged for a crime higher than second-degree murder – effectively ending all criminal legal action against her. Virginia Taylor went free… and perhaps got away with murder.

* C. tetani was first isolated by Shibasaburo Kitasato in 1889, a year after William Taylor’s death. However, doctors of the time knew the symptoms of tetanus toxicity.