Finding a formula for the perfect brew

Tea is a demanding beverage. That ‘perfect cup’ is very hard to make. While instant coffee powder has been widely adopted, chemists have quite failed to make a decent artificial tea powder, and the vast majority of us still use tea leaves. 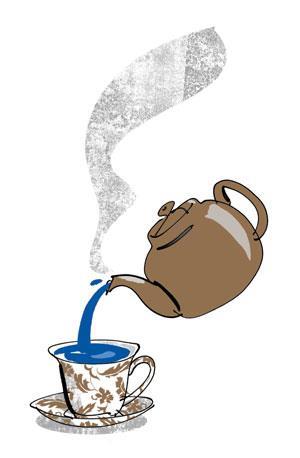 Many tea drinkers have special routines to improve their tea. I know one who reckons that water which has stood for hours in the local pipes has dissolved various chemicals which degrade the taste of the tea. Accordingly, she runs the tap for a long time before filling the kettle. Another thinks that the taste of tea is degraded by oxygen from the air dissolved in the water, and says you should boil the water thoroughly to expel the oxygen, and perhaps keep it boiling for a few minutes before making tea with it. Curiously enough, the Chinese approach is quite different. They use water that is hot but not quite boiling, and discard the first cup of tea that they make.

This reminds me of the chemical method of extracting biochemicals from biological tissue. You boil it in a solvent. The best solvent often dissolves two or three substances from the tissue, thus giving a mixture in solution that the biochemist then has to separate. By the law of cussedness, the compound that dissolves first and most easily is often the one you don’t want. One useful trick is to extract the tissue briefly once, and discard the resulting solution. With good luck, that first extraction will remove much of the unwanted material. The others, including the one you do want, will remain behind. You can then extract the tissue more thoroughly, so as to get a solution containing more of it. The Chinese technique suggests that this applies to tea. If so, the enlightened approach would be to dip the teabag in hot water briefly, thus extracting the most soluble but poor-tasting components, then use it to make a fresh cup of tea in the usual way. The result should taste noticeably better.

Another theory again blames substances in the water. A friend of mine, who is often complimented on his tea, first puts the water through a water filter. This contains beads of ion-exchange resin, which soften the water by removing calcium and magnesium ions and replacing them with sodium ions. I am not sure whether the softness or hardness of the water has any effect on the taste of the tea. But the filter also contains charcoal made from coconut shells, which absorbs a lot of unwelcome impurities. Indeed, during the first world war the authorities encouraged the public to buy coconuts, and charcoal from their shells was used in military gas masks. Much piped drinking water is chlorinated to kill disease organisms, and I suspect that the process leaves chlorinated substances in the water. The filter with its coconut shell charcoal perhaps removes this taste.

Anyway, there are several theories about the taste of tea and how to make the perfect cup. One chemist told me that before about 1860, a barge-load of insoluble Prussian blue left Tyneside every year and went to China. It came back as an impurity in tea. The Chinese had discovered that those mad westerners liked their tea dark. I have no idea what it did to the taste.