When it comes to diversity, actions speak louder than graphs

There can be such a thing as too much data

Last month, the Royal Society of Chemistry launched its Diversity landscape of the chemical sciences report. This document featured dozens of charts and figures that paint a bleak but familiar picture of diversity – or lack thereof – among UK chemists.

There were a couple of positives. Chemistry outshines other scientific disciplines when it comes to ethnic diversity among students, for example, and the number of women inventors holding patents has increased over the last few years, particularly in technologies related to chemistry. But the rest is pretty bad news, especially when it comes to gender equality in academia. Efforts to address the leaky pipeline of women in science have been ongoing for more than 20 years. But the proportion of female chemists still drops sharply after PhD level. Among UK undergraduates, 44% are women but at professor level, it’s just 9%. And the gender pay gap, according to the RSC’s most recent pay and reward survey, has widened over the last few years. 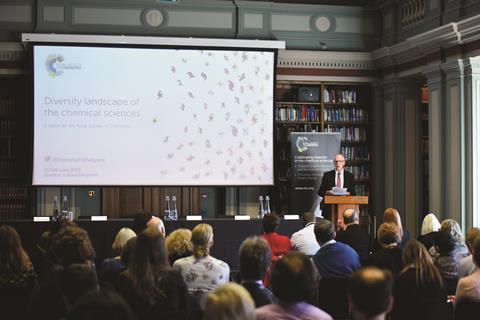 The report includes a list of commitments from the RSC topped with a pledge to collect more data on mental health, disability and socioeconomic background, along with the promise of more research into the leaky pipeline of female chemists. This will involve focus groups to try and understand the reasons why women leave the field before reaching a senior levels.

But I can’t shake the feeling that we already know at least some of the answers to this. We’ve all seen the figures and heard the anecdotes. Careers in research offer few opportunities for returning after a break, a poor work–life balance, a lack of long-term security and often gruelling, stress-filled early years.

Of course we must make sure actions are underpinned by evidence, but the real challenge now is to make changes that solve these issues. If the aim is to challenge the status quo, our efforts to understand the problem must be matched with action.

And that means action across the board – addressing science’s diversity issues isn’t the sole responsibility of learned societies. A lot of the factors that lead to women leaving chemistry are problems deeply engrained within research culture, and the process of fixing these will be slow. Top-down changes to policy will have to work alongside bottom-up approaches at the level of labs and even individuals.

Yes, it is important to understand the diversity landscape. But it is even more vital to change it.