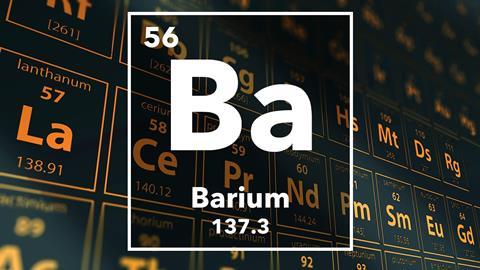 Hello, this week rat poison, fireworks, fine glass, oil exploration and enemas. Spotted the link yet, well the answer is sitting in the apple green element at the bottom of group two.

For many, barium has an unpleasant association. The first thing most people think about when this element is mentioned is the "barium enema" or "barium swallow". Sickly memories often surface of the radiology clinic – where they even ask which flavor you would like strawberry or banana...These "cocktails" consist of a white fluid of barium sulfate that is either "squirted" up one orifice or swallowed down another. It is used to help diagnose diseases and other problems that affect the large intestine or the esophagus. The heavy barium blocks X-rays, causing the filled part of the digestive system to show up clearly on the X-ray picture or CT scan. Barium sulfate can be taken into our body because it is highly insoluble in water, and is eliminated completely from the digestive tract. And if this sounds like an unpleasant experience, it's lucky that it's barium sulfate and not just barium that is used for the exam. 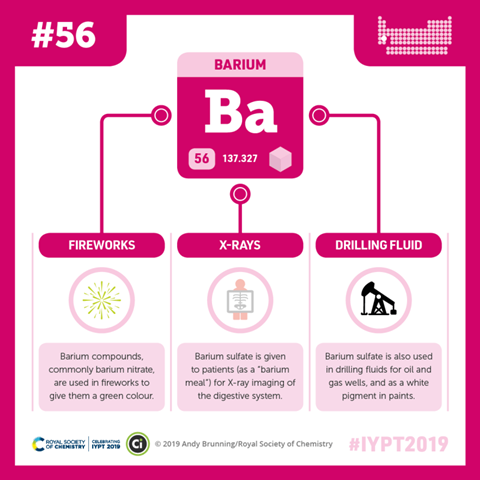 Barium is a highly toxic metal. It's extremely poisonous – no-one in their right mind would consider consuming it. At low doses, it acts as a muscle stimulant, while higher doses play havoc with the nervous system, causing an irregular heartbeat, tremor, weakness, anxiety, paralysis, and potentially death as the heart and lungs fail. Acute doses of less than 1 gram can be fatal to humans. Indeed barium carbonate is useful as rat poison. Unlike barium sulfate, barium carbonate dissolves in stomach acid, releasing the poisonous barium to do its rather nasty but efficient work.

Conveniently Barium, which is a soft silvery metallic alkaline earth metal, is never found in nature in its pure form, due to its reactivity with air or in water. In fact the metal is a "getter" in vacuum tubes, meaning it's used to remove the last traces of oxygen.

Barium compounds are notable for their high specific gravity – which, in practical terms, means the compounds are extremely heavy. This is true of the most common barium-bearing mineral, its sulfate – barite BaSO4 – is called 'heavy spar' due to the high density (4.5 g/cm3 – the size of a pea). Indeed the name barium comes from the Greek barys, meaning "heavy". Due to its density barium compounds, and especially barite (BaSO4), are extremely important to the petroleum industry. Barite is used in drilling mud, a weighting agent in drilling new oil wells. 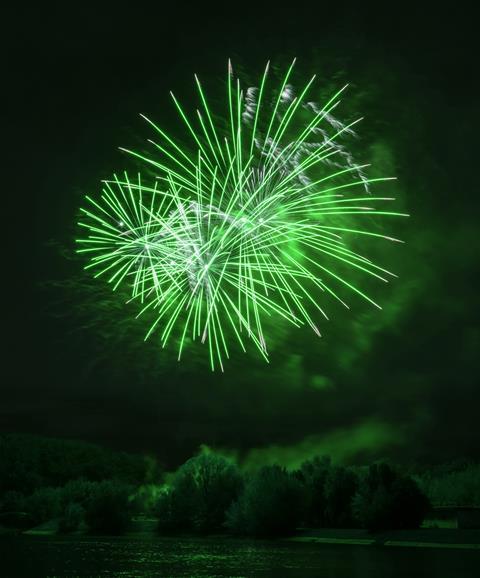 Barium salts are used to add a green colour to fireworks

Barium carbonate also has an application that is more appealing than rat poison – it's used in glassmaking to enhance the luster of the glass. And barite is used in paints, bricks, tiles, glass and rubber production; barium nitrate and chlorate give green colors to fireworks and barium titanate was proposed in 2007 to be used in next generation battery technology for electric cars. Despite the relative high abundance of barium sulfate in nature - it's the 14th most abundant element in earths crust – due to its multiple uses it has a high value, in the range of $55/100grams. Total annual world production is estimated at around 6,000,000 tons. And the main mining areas are the UK, Italy, the Czech Republic, USA and Germany. Total world reserves are estimated to be around 450,000,000 tons.

And why am I so particularly interested in this heavy, poisonous element? Well, as a scientist I actually study barite - I separate barite from marine sediments – the mud at the bottom of the sea – and analyze its chemistry which tells us fabulous stories about seawater chemistry and productivity in the geological past.   Barite forms in proportion to ocean productivity – the activity of marine phytoplankton the floating "trees" of the ocean which are the base of the marine food chain – and accumulates in marine sediments. The accumulation of barite in ocean sediments can tell us how productive the ocean was at any given time in Earth's history. Barite in contrast to many other minerals is not soluble and is preserved over many millions of years recording the chemistry of the ocean and how it changed over time.

And therefore it's a great archive of ocean history.

Chemist Adina Payton telling the tale of Barium. And talking of what sits at the bottom of the oceans.

"How did it smell?" That was the only question I needed to ask a geologist colleague of mine about the sediment she was trying to understand. The smell of the sediment tells a great deal about the underlying chemistry.Thick black anoxic sediments can be accompanied by a putrid smell which is unique to reduced sulfur.

Maybe this is why sulfur has such a bad reputation. My son wouldn't eat eggs for 6 months when he got a smell of his first rotten one.

That's the stinky story of Sulfur with Steve Mylon on next week's Chemistry in its Element, I hope you can join us. I'm Chris Smith, thank you for listening and goodbye.