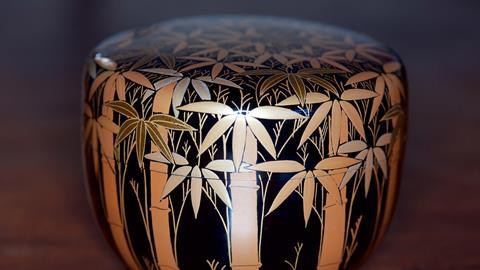 When handled properly, the compounds that cause the poison ivy rash can create a rich, hard wearing lacquer

This week, Kat Arney introduces a two-faced tree sap that can cause nasty rashes or be made into beautiful Japanese furniture…

What’s the connection between a tasty tropical fruit, a nasty skin rash and Japanese furniture? The answer is urushiol – an oily mixture of organic chemicals found in the sap and other parts of plants such as mangoes, poison ivy and the urushi – or lacquer – tree.

Chemically speaking, the molecules in urushiol are known as catechols. They’re based on a ring of six carbon atoms, with alcohol groups attached to two of them, and then a little string of hydrocarbons trailing off another. They are produced by a number of different plant species – most notably those in the Toxicodendron genus, including the Chinese lacquer tree, poison oak and poison sumac.

These woody shrubs may be unfamiliar to UK-based listeners, unless you’re a fan of American literature, but they’re common perils in the United States. Brushing against them releases urushiol onto the skin, which causes an allergic reaction and rash in people who are sensitive to it – an estimated 50 million cases every year in the US. And because it’s oily, urushiol sticks to skin, clothes and tools, and is hard to clean off, making the problem worse. The rash – which usually ends up as nasty blisters – starts a day or so after someone has been exposed to urushiol, and can persist for two miserable weeks or more.

But although the victims of this urushiol-induced dermatitis may not appreciate it at the time, under the surface there’s actually a fascinating biochemical reaction happening. Once they get into the body, the chemicals in urushiol become oxidised and stick to proteins in skin cells. This changes their shape, making them seem strange and foreign to other cells in the immune system. The immune system then mounts an attack on these healthy skin cells as if they were foreign invaders, damaging the tissue and creating swelling, inflammation, pain and blistering. Even worse, once someone has responded badly to poison oak or ivy, they’re more likely to have an allergic reaction in the future, and it can get worse with every exposure. 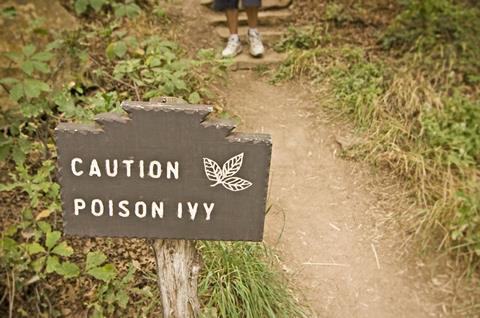 But as well as causing pain and misery, urushiol can also bring joy and pleasure – at least for fans of oriental lacquerwork. For more than 6000 years, Japanese craftspeople and furniture-makers – as well as those in China and Korea – have used the sap of the urushi tree as a glue and varnish. This urushiol mixture is tapped off from the trunks of the trees in a similar way to how natural latex is collected from rubber trees. Painted on in multiple thin layers, urushiol oxidises and polymerises in conditions of high heat and humidity, creating a shining, solid coating.

Not only is it beautiful, but it’s also long-lasting. Urushi lacquer can withstand temperatures up to 300°C as well as holding off damage by acid, alkali and alcohol – although it can be broken down by UV rays from the sun and other sources. Although people with an urushiol allergy might struggle in a career as a lacquer-worker, the good news for consumers is that if the coating is properly cured, it loses its allergenic abilities. But if the conditions aren’t right for hardening the lacquer properly, it can still cause a rash.

Finally, there’s the mango connection. Mangoes belong to the same plant family as poison ivy. Their vines are packed full of urushiol, and the skin of the fruits also contains some. Because most people don’t bite into a whole mango and just cut out the tasty urushiol-free flesh, this doesn’t usually cause a problem. But some sensitive individuals might find they get a rash on their hands from handling the fruit, which can be avoided by wearing gloves – or by getting someone else to prepare it. Perhaps they could even serve it to you in an urushi lacquerwork bowl, if you’re lucky!

That was Kat Arney on urushiol – irritating or beautiful, depending on how you handle it. Next week, mysterious lights in the night…

In English folklore, this is known as the will-o’-the-wisp, the hinkypunk, and ignis fatuus, or foolish fire. These ghostly lights, flames that appear and disappear, would spark fear in the Fenlanders, who usually lay on their stomachs, eyes closed, until the phenomenon departed.

Kit Chapman joins us next week to explore the chemical conclusions around mysterious that served as inspiration for the dead marshes in the lord of the rings. Until then, tweet or email if you’d like to get in touch – we’re chemistryworld@rsc.org and @chemistryworld. I’m Ben Valsler, thanks for listening.