Early responses to the periodic system 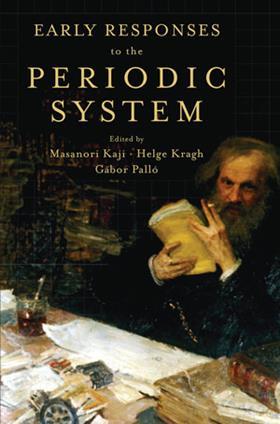 Early responses to the periodic system comprises a set of academic historical essays, each discussing how Dmitri Mendeleev’s periodic law was received by chemical communities around the globe. The contributors have limited their discussions predominantly to the late 19th and early 20th centuries. Chapters are mostly written by historians of chemistry native to the relevant countries, although there is a foreword that introduces the scope of the essays, and pulls together some recurring themes and observations of differences between different chapters.

As these are academic essays, aimed at a reasonably academic chemical historian audience rather than the interested amateur, the language is often quite formal and complex. The level of assumed knowledge is high, but there are extensive notes and references to fill in gaps. At times there is, understandably, a feeling more of establishing a record than telling a story.

That said, the findings that emerge from the contributors’ research in contemporary textbooks, journal articles and correspondence are interesting. Given the pivotal importance of the periodic table in modern chemistry education, one might naturally assume that it would have made an immediate impact when it was introduced.

However, given more careful consideration of the prevailing knowledge at the time, and the incomplete nature of Mendeleev’s system – correlating elemental properties with atomic weight in the absence of any understanding of atomic structure – it becomes less surprising that his ideas were not immediately accepted by all.

What is slightly more surprising (to me at least), is the different degrees and implied reasons why chemists in different parts of the world reacted differently to the theory. In Sweden, for example, most chemists were at that time focused on practical analysis and the hunt for new elements.

In France, on the other hand, the periodic system encountered a thriving theoretical community, almost obsessed with finding a suitable way to classify the elements. Mendeleev’s theory had to compete with a multitude of other classifications, each with its own advantages and faults, and its own champions within the community.

One of the most interesting themes across the book is the influence of international study on the spread of ideas. Then, as now, the chemists who looked beyond their home countries were instrumental in shaping the collective response to new concepts.

Overall, the book contains interesting insights. The nature of the material means that it occasionally feels slightly repetitive, but readers with an interest in history, and a willingness to wade into the at-times tortuous language, will be rewarded with nuggets of enlightenment.