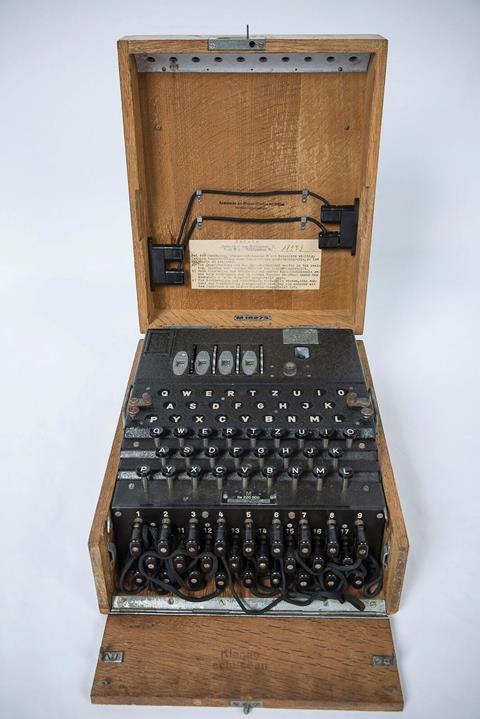 In the late 19th century, archaeologists on Crete discovered small clay tablets inscribed with lines of mysterious symbols. For decades, no one could decode them.

Linear B, as it was known, was a script used more than 3000 years ago by the ancient Minoan civilisation. Like Egyptian hieroglyphs, it comprised symbols rather than an alphabet. Decoding it was a fiendish task, as the linguists who attempted it had no translations in known languages to compare with the symbols. They also had to figure out what language was being represented in the first place.

Cracking this ancient code required patience, skill and ingenuity, and was eventually achieved by a collaboration of experts in the UK and America in the 1950s. The story of Michael Ventris – who eventually gave up his job as an architect to dedicate his working life to deciphering Linear B – is one focus of the Codebreakers and groundbreakers exhibition at the University of Cambridge’s Fizwilliam museum.

The second half of the exhibition highlights a different set of codebreakers working at around the same time: those who used mathematics to decipher top-secret messages during the second world war, and in particular the work of Alan Turing and his colleagues at Bletchley Park, who devised ways to decipher codes set by the Germans’ fiendishly complex machine, Enigma.

The exhibition is not large, occupying a single room within the museum’s first floor art galleries. But there are some real gems on display, including a real Enigma machine recovered from a German U-boat in 1944, as well as a British Typex that was used to code secret messages, both on loan from GCHQ.

Other highlights include artefacts from Alan Turing’s early life that are being publically displayed for the first time, including school reports (he was, as you might expect, already a brilliant mathematician, though not so good at English or French), and some of the letters he wrote to his mother while working at Bletchley.

The exhibition skims over some of the more troubling details of Turing’s story, however, only briefly mentioning his prosecution and the tragic events that ultimately led to his death aged 41. And it didn’t provide much description of how information is encrypted in the modern world, saying only that that most of today’s companies use codes based on prime numbers. It would have been interesting to find out more about this.

Having said that, there were plenty of interactive exhibits and enough material to keep me entertained. I learned a few new things, including how Turing was into hobby chemistry, which involved electroplating spoons with gold uisng homemade postassium cyanide. The exhibition includes one of these spoons, submitted by Turing’s mother to police after his death in 1954. Mrs Turing refused to accept the coroner’s verdict that her son had deliberately ended his life by taking cyanide, instead believing it was an accident resulting from one of these experiments. Turing never left a suicide note, so while we are not in doubt about the huge impact he had throughout his life, we can never be certain how it ended.