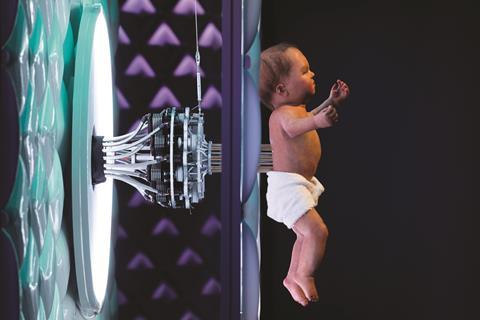 I don’t usually stare so blatantly at strangers in public, but today I’ve paid for the privilege so I don’t stop myself, even when her eyes turn towards me and stare straight back.

Her appearance is, at least initially, attractive. She is of Japanese origin, with shoulder length black hair and totally unblemished smooth skin. And now her eyes are locked on mine and I detect a hint of a smile. Then, for a brief moment, I feel a connection has been made and she has detected something about my inner self. Embarrassed by this, I look away. Immediately, I’m angry at myself and force myself to look back. I must show her she has no power over me. We stare at each other a little longer. And then, to my horror, her gaze passes from me to my friend, who is too busy looking at something else to even notice. I, on the other hand, am livid.

And then I laugh at myself because I reflect that I’ve been manipulated, not by a woman but by a machine.

That I have been touched emotionally, even if only briefly, by this experience has made my visit to the Science Museum’s Robots exhibition worthwhile. It has made me all too aware that our relationship with machines is changing. I’ve not just seen the evidence of this – I’ve felt it.

The exhibition takes you on a journey from medieval automatons, through breathtaking examples of clockwork robots, such as a boy from the 18th century that can apparently write anything you want him to, through amusing 1950s specimens that are little more than swivelling bins with eyes, and on to the celebrity robots of today, such as Honda’s Asimo.

The middle section is a little cluttered with examples that are too similar and, to me at least, neither familiar nor interesting. I would have liked to have seen more examples in operation rather than static exhibits. But overall the displays are brilliantly constructed, with accompanying videos when they themselves are too valuable to be continually operating.

The more modern exhibits do include functioning examples. The dexterity and strength of some of them is a little sinister, demonstrating a mechanical superiority that makes me fear for my professional future. With my discovery that they can at least fake emotion, I wonder if the days of humans as the greatest machines on the planet are numbered. But then I look at another exhibit and I conclude that we have a few more decades left as lords of the planet. It stands motionless beside a sign that reads: ‘this exhibit is not working’.