In UK cinemas | Streaming via Amazon.com in the US 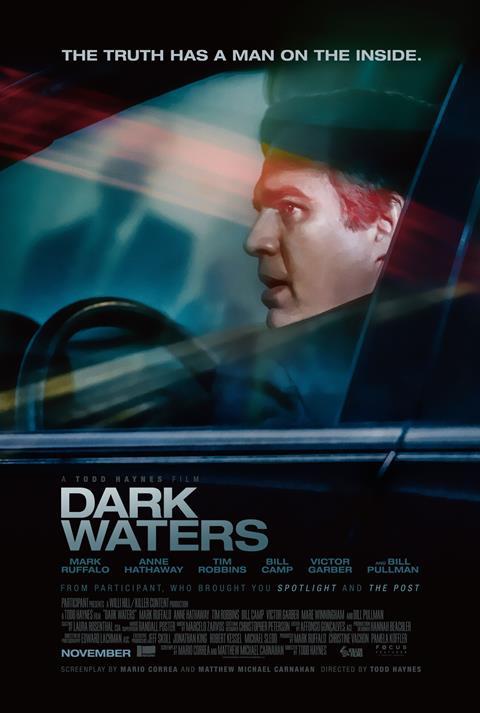 ‘Better living through chemistry’ is DuPont’s reassuring and inspirational slogan. Early in the timeline of the movie Dark Waters, it is uttered by a DuPont executive who adds that ‘it’s in our DNA’. The scene has dramatic irony: ever since the surfactant perfluorooctanoic acid (PFOA) was found in the waterways around DuPont’s Washington Works plant in West Virginia, the company has been embroiled in a mountain of court cases alleging DuPont has made people’s lives much worse.

Based on a 2016 New York Times Magazine article, Dark Waters charts lawyer Rob Billot’s two-decade battle to bring DuPont to account for diagnosed and future illnesses of thousands of class action plaintiffs due to exposure to PFOA. The company paid out millions in to settle claims – over $16 million (£12 million) to the US Environmental Protection Agency in 2005 and then $670 million to Billot’s class action lawsuit in 2017.

DuPont used PFOA to make the wonder material Teflon. While Teflon is harmless to humans, the toxic PFOA residues of had leached into the bloodstreams and tissue of residents living around Washington Works. But when Billot realises how ubiquitous Teflon is in his life, it compounds his fear for those living around the plant – as well as for himself and everyone who bought products made with PFOA processes. It remains unclear whether Billot knew – any more than a general audience – that using a Teflon frying pan would not be dangerous.

The film opens up the subject of PFOAs to a lay audience and explains the science well. It’s noted that Billot isn’t a chemist. Dark Waters shows a lunch meeting in which a chemistry-educated contact puts the science into perspective for Billot. The film also presents the years-long wait for clinical evidence of a correlation between high PFOA-exposure and conditions such as cancer, ulcerative colitis and thyroid disease.

Dark Waters is at times gut-wrenching. From the farmer’s collection of cattle carcasses that rotted from the inside out to the intensity of harm to humans, it’s a painful watch but well worth the emotional energy.

Billot is a rare example of bravery and decency in a capitalist corporate world. His switch in sides – from protecting clients like DuPont to taking them on – provides hope and balance throughout. Commercial pressures often prevent journalists and lawyers openly questioning the actions of the powers that be, and DuPont workers livelihoods depended on toeing a line.

If there is a message in this film, it is that all – whether journalists, scientists, those sitting in C-suites or working on factory floors and admin desks – need to call out this kind wrongdoing when we see it.