Science in the cinema often comes off poorly. Some images that spring immediately to mind include evil geniuses, near-instant genetic fingerprinting and faster-than-light space travel. But Griep and Mikasen show that popular films can be chemically interesting as well as entertaining. 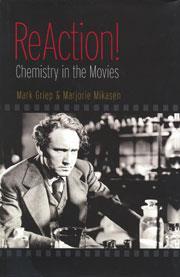 Spencer Tracey - one of many actors to portray a chemist

Each of the 10 chapters covers a subgenre of film, such as the invisible-man film, the Jekyll-and-Hyde film, or the forensic science film. Some of the chapters are significantly better and more entertaining than others.

The book really comes alive when it takes even the unlikeliest chemistry in a film seriously. The first and possibly best example of this is where the authors discuss a candidate for the compound that turns Dr Jekyll into Mr Hyde, based on contemporary evidence about Robert Louis Stevenson, but there’s more of this all of the way through, further examples including Flubber, Moonraker, and an Elvis Presley vehicle, which I will confess to not having seen, called Clambake  .

Where it is at its weakest is the long introductory digressions in many of the chapters, which often have little connection to chemistry and don’t really serve to put the material in a wider context. Sometimes this leads to films, like United 93, that only have a tenuous connection to the subject (in this case, aviation fuel’s flammability) being dragged in.

From one point of view, the range of films covered is astonishing. We have almost forgotten silent films from the 1910s, US government information films about analytical spectroscopy from the 1940s, and blockbusters from the present day. On the other hand, the only film not in English is Claude Chabrol’s Merci pour le chocolat.

The other thing is that it’s not clear for much of the book who it’s aimed at. It turns out to be at least partly intended for teachers of US undergraduates, though I’m sure at least some of the less earnest films would be ideal for high school students and any chemist-film buffs.