Hello World: How to be Human in the Age of the Machine 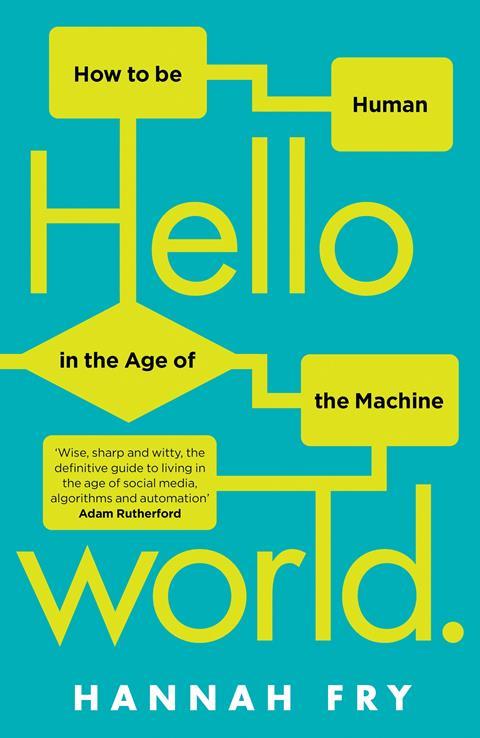 ‘I don’t like the look of your book,’ my housemate says. ‘I think reading it will scare me.’

I can understand why. Even just reading the blurb of Hello World serves as a reminder of just of how much of our daily experiences are already and increasingly will be influenced by algorithms, a fact that sits uneasily with most people. A lot of what we hear about machine learning in the media focuses on its potential to manipulate us. Recent news reports of intrusive political campaign tactics, for example, have seen algorithms discussed in the same breath as conspiracy theories. And there’s a sense of helplessness in much of the coverage implying the inevitable take-over of corrupt corporate giants, or worse – cold, inhuman AIs.

In this book, however, mathematician Hannah Fry takes a step back, encouraging the reader to remember that algorithms don’t claim to be all-knowing, they just provide their best guess to the problems we’ve set them.

Fry examines topical decision-making algorithms under seven themed chapters: power, data, justice, medicine, cars, crime and art. Like a knowledgeable friend giving an honest explanation in a conversation over dinner, Fry tells stories about the things that have gone wrong, but remains optimistic, explaining what happened, why the algorithm was implemented in the first place, and reminding us what the alternatives are.

For example, in the chapter on justice, Fry describes how she was initially against the idea of using algorithms in a court room. However, she highlights the massive inconsistencies in the sentences handed down by human judges and tells us about an algorithm built to predict the risk of re-offense with pretty good accuracy. Both approaches throw up some pretty nasty errors, but perhaps using both to complement each other might not be such a bad idea.

Using reported, relatable real-life examples to illustrate the strengths and weaknesses of each algorithm, Hello World is a page-turner: each new chapter feels like a new conversation, and always one I want to be included in. I am completely won over by Fry’s mantra that pushing for transparency in who is writing these algorithms and for what purpose, is key to maintaining control of an evolving machine-driven society. She suggests that instead of writing the algorithm to give us a single answer, let’s tell it to show us its working and its top shortlist. Let’s force ourselves to remember exactly what we are working with, not give these lines of code unwanted supreme power, and let their strengths complement ours for a world we want to say hello to.

To my housemate, I reply: ‘Read it. I think you’ll love it. The robots won’t do you any harm if you know how to teach them not to.’