The dialogues: conversations about the nature of the universe

In a crowded university cafeteria, Alice needs to find a seat. She spots Bob reading a large, hardback graphic novel… 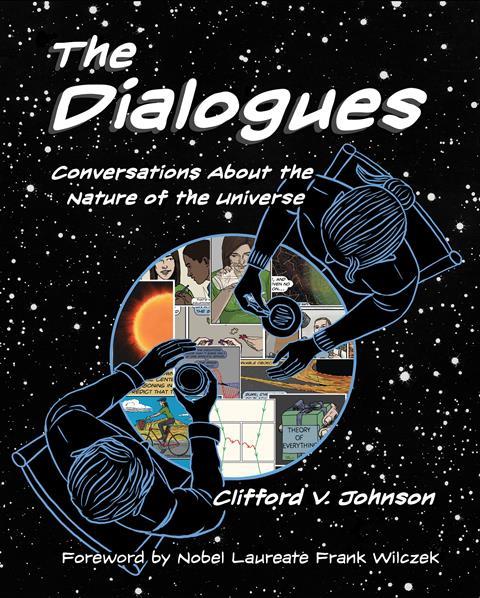 ‘Sorry to interrupt, I read comics too, but I don’t recognise that one. What is it?’

‘Well, this isn’t a ‘normal’ comic. It’s written by a physics professor from California. He thinks that we understand science best when we have conversations about it. So he wrote this – The dialogues – in which characters talk about the nature of science and the universe.’

‘Oh, right – so rather than write prose, he’s put his arguments as a back-and-forth between two people?’

‘Yeah. It’s an old trick. Plato, Socrates and Copernicus all wrote like this, and more recently Carl Djerassi, the guy behind the contraceptive pill, did the same thing in novels and plays.’

‘But it’s a graphic novel?’

‘Clifford Johnson, the writer, says it allows him to put more context in, to better illustrate the ideas, and to show the science in a way that the written word alone couldn’t do.’

‘It is a good concept. And in some ways it really works – I’ve learned things from this that I had never fully grasped before. Deep physics stuff, like the nature of spacetime, dark energy and the role of quantum gravity. He also adds in bits about the nature of science itself, so there’s a nice mix. But occasionally the execution doesn’t quite live up to the concept.’

‘Some of the dialogue is a bit stilted, and just doesn’t feel like a conversation real people would have. And to really get the most from a dialogue, you have to be able to imagine yourself as one of the participants – that’s not always easy.’

‘Because they don’t ask the questions you would ask?’

‘Exactly. And that can distract from the flow of the argument. Also, there are some pages where it feels like the graphics are filler – just lots of pictures of the same two faces. Having said that, there’s some really thoughtful imagery and great use of the format, like the clever use of a jigsaw puzzle in chapter eight.’

‘Sounds like you’ve enjoyed it overall, despite a few shortcomings.’

‘I have. I got through it pretty quickly, but there’s lots of extra detail in notes between each chapter, so I could go back again and delve even deeper. And I don’t think you need to be interested in comics to make the most of it – just be willing to involve yourself in the dialogue.’