17 equations that changed the world 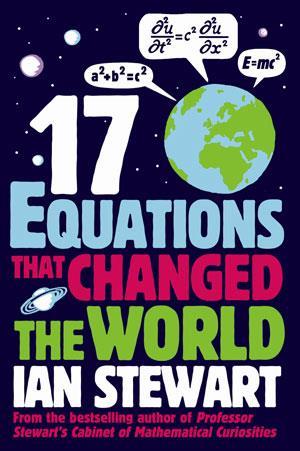 This is one of those books that might not immediately attract the attention of chemists, but which on closer inspection does contain much material that is relevant to the discipline. It’s probably also true to say that it would be unlikely to be recommended as a course text, but is the sort of volume that increases one’s knowledge across a range of topics and would contribute to an individual being considered to be well read.

The author sets the scene with a short preface entitled Why equations? which immediately sets the tone of writing for the rest of the book and should convince the reader that it will be quite accessible. The choice of 17 equations seems fairly arbitrary, but I doubt that anyone would argue with the significance of those included. Some, of course, are of more interest to chemists than others. Those that I were instantly drawn to were the second law of thermodynamics, Schrödinger’s equation and the Fourier transform. However, the reader is enticed with more informative titles, which for these chapters are law and disorder, quantum weirdness and ripples and blips respectively.

One thing that immediately struck me about this book was, ironically, the lack of equations in the text. The author discusses each of the title equations in detail, concentrating on the use of words rather than supporting mathematical arguments. The first page of each chapter displays a large font version of the subject equation. Good use is made of the space around this to explain each term in the equation, and authors of books containing mathematical material could do worse than to adopt this system, as I found it incredibly helpful. The remainder of the page contains a brief summary under the headings What does it say, Why is that important and What did it lead to? Just reading these 17 one page summaries would provide the reader with much useful information.

Overall, this is well worth a read both for its chemically relevant content and for extending one’s knowledge into neighbouring disciplines.