An optimist’s tour of the future 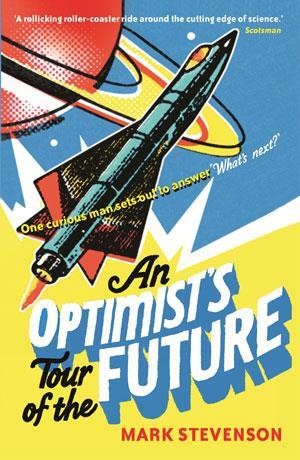 In this book, humorous scientist Mark Stevenson tours the globe in search of groundbreaking thinkers and scientists, even bumping into a few free radicals along the way. The narrative is split up into four distinct (and yet linked) sections: man, machine, Earth and re-boot.

Theories constantly bounce off the walls – from Aubrey de Grey’s radical transhumanism and ascension from our mortal bodies, to the genetic infrastructure of said bodies and how we can force small bespectacled men in basements to write the next generation of artificial intelligence – this book has it all.

Stevenson never meets an idea with scepticism, instead preferring to visit the theorist or engineer behind it, obtain their point of view and then make some rather humorous and witty points of his own. I find this a refreshing take on most scientific reads that focus too much on the facts and not on the theories. He focuses on what will be coming to the home in the not too distant future, rather than penning an epic love letter to the prototypes of yesteryear that never made the grade.

Not all is fun and games, however, as Stevenson highlights some of the dangers of future technology. He remarks that technology will be misused and that the next Chernobyl or 9/11 disaster is never far off. Do not let this put you off, though! No new scientific or technological cause is without drawbacks, be they mortal or ethical.

This is a volume filled with hope, optimism and wondrous bouts of side-splitting, scientific punchlines. This book makes for an excellent and insightful read for anyone doubtful about the future of innovative science.

Purchase An optimist’s tour of the future from Amazon.co.uk