In Situ with Christina White 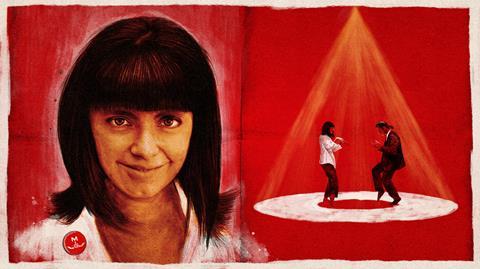 Christina White is the Lycan professor of chemistry at the University of Illinois Urbana–Champaign, US. She has discovered C–H oxidation reactions that don’t need any specific groups on the molecules to be selective, delineated their selectivity rules and pioneered the area of late-stage functionalisation. In 2019, she became the first woman to receive the American Chemical Society award for creative work in synthetic organic chemistry. She was speaking to Katrina Krämer at the 2019 ACS national meeting in Orlando

I really love theatre and independent movies. I’m a huge fan of people like Wim Wenders, Spike Lee, Quentin Tarantino and the Coen brothers, who tell great stories that also have underlying commentary about the human condition. I also like the Greek director Yorgos Lanthimos, who did The Favourite and The Lobster.

For a year, I was a theatre major in college. I studied directing and had the opportunity to direct School Daze, a play based on a Spike Lee movie. I was pretty proud of that at the time, but I am not sure what I would think if I saw it now. At the same time, thanks to the insistence of my pharmacist mom and engineer dad, I was taking chemistry, and it was a revelation that [chemistry] could also be a very creative form of expression. You’re creating things that, even though they follow the rules of nature, don’t necessarily exist in nature. That really appealed to me.

I watch professional sports any time I get a chance. I think people competing at that level ties into something bigger about the human spirit. Seeing someone trying to reach a goal, facing obstacles and overcoming them in real time is incredible.

We went to a Chicago Cubs baseball game with my group. It was the last inning, the Cubs were down by a lot. I wanted to leave, because it was a long drive back to Champaign. But my group convinced me to stay. The Cubs had three men on base, and [the batter] hit a home run for a grand slam to score four runs, which resulted in them winning the game. It was the most extraordinary moment because it captured this idea that you face a lot of times in research: you’re trying and trying, and nothing is working. But if you persist and try one more time, you succeed. It’s the most amazing feeling in the world when that happens.

I was born in Greece, and out of all the cuisines, Greek is the one I like the most. If I could eat any food it would probably be my own moussaka, which is a recipe from my grandmother and the best I’ve ever tasted. I’m not sure I’m willing to reveal her secret for it, but it’s very different from the classic because the recipe originated from Greek communities in Mikra Asia (Asia Minor).

My office is a wonderful place to think. It’s bright yellow, a very Mediterranean colour. I try to block off my mornings and give myself that time to think. I’m not necessarily a morning person, in that I do not naturally wake up early, but I feel like that’s when my thoughts are cleanest.

My husband and sons gave me an hourglass that measures exactly one hour. I turn it over, listen to classical music and start working on a project. I am monomaniacal by nature, so the hourglass is an attempt to remind myself to move on to something else. It usually doesn’t work.

My group and I work on activating C–H bonds and converting them to oxygen, nitrogen and carbon. For some of the reactions we have discovered, like our allylic C–H functionalisations, we go through a carbon–metal bond as an intermediate. Jared Delcamp, now a professor at University of Mississippi, who worked on this project during his doctorate in my group, designed our group logo (MCW; see illustration). The M is a metal bond, the C stands for carbon and the W is meant to be a hydrocarbon. Coincidently, those are also my initials. My husband got it made into a belt buckle for me, and I’ve worn it ever since.

Late-stage functionalisation is revolutionising drug discovery. Organic synthesis requires you to master a lot of techniques that are not automated, and make a lot of quick decisions based on observations. While this is exceptional training for students, de novo synthesis of drugs and natural products is a rate-limiting step in using small molecules to discover and explore function.

The reactions we discover enable scientists to use nature’s strategy: taking existing molecules and making atomistic changes to look for new function. Since our original paper demonstrating this in 2007, we have been excited to see other labs developing reactions for late-stage functionalisation that proceed by the same selectivity rules. It is also exciting that the pharmaceutical industry is using it to diversify lead compounds to look for new or improved function.

About every 10 years, there’s a paper on an automated system to discover new reactions. I have yet to see a Sharpless dihydroxylation or Jacobson epoxidation come out of these automated systems. Until something like that happens, I’m not going to be convinced that the rate-determining step in reaction discovery is setting up a lot of reactions and rapidly analysing them. The real rate-determining step is being able to recognise something interesting in the data. And I think that requires the human element.