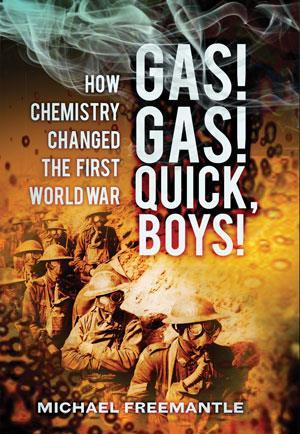 The first world war has been called ‘the chemists’ war’, probably because the overriding image is the use of poison gas, mainly chlorine, as a weapon. But, as Michael Freemantle shows, use of chlorine was only a small part of the role that chemists played in this terrible conflict.

There was, for example, the chemistry of explosives. These are covered in chapters detailing their deployment in shells, Mills bombs and grenades. Typical explosives included trinitrotoluene, ammonium nitrate and picric acid.

Chemists also refined metals, making steel in massive quantities and non-ferrous alloys for shells and bullets. Metal compounds were important, too, with uses ranging from firing shells (potassium nitrate) to photography (silver halides). Dyes were provided for the distinct khaki uniforms of the soldiers, a colour that had been adopted by the British Army only in 1902. Before the war, dyes were obtained from Germany, and the development of a process capable of producing dyestuffs in sufficient quantity was a considerable feat by Allied chemists.

Chemistry also contributed to the care of the wounded. Several substances were used, including antiseptics and analgesics, as well as treatments for typhoid and cholera. The refined alkaloid morphine was used as a painkiller from 1916, and also in its unrefined form, opium, as a painkiller and sedative. For example, as Freemantle records, it was given to the poet Siegfried Sassoon at the Battle of Arras in 1917.

The book ends with an evaluation of the effect of chemistry on this war, and Freemantle concludes that it was a double-edged sword. The ‘cornucopia of good things from chemistry’ undoubtedly balanced a ‘Pandora’s box of death and destruction’. Throughout, there is enough technical detail to satisfy the chemist, but not so much to overwhelm the non-specialist reader. It is well researched and gives the reader a great deal to think about.