Half-life: the divided life of Bruno Pontecorvo, physicist or spy 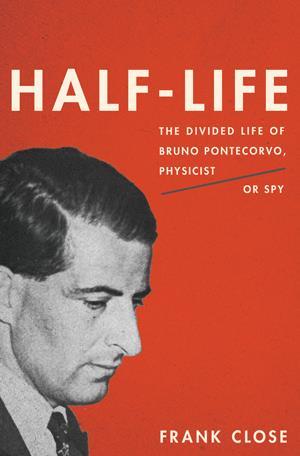 Frank Close, an Oxford physics professor previously based at the Rutherford Appleton Laboratory, has written several books presenting complex scientific concepts to the masses. By contrast, Half-life is a painstakingly researched account of the life of the nuclear scientist Bruno Pontecorvo, who, on holiday in Italy in 1950, disappeared with his family. He had been due to transfer to the University of Liverpool as their new chair of physics. This was soon after the confessed Harwell spy Klaus Fuchs had been arrested and four years after the Cambridge experimentalist Nunn May was convicted.

Pontecorvo’s potential had been recognised early on in his life by the Italian physicist Enrico Fermi in Rome in the 1930s and a scholarship enabled him to work on nuclear science with the Joliot–Curies in Paris. Escaping from occupied Europe in 1940, he developed well logging technologies for an oil company at the Chalk River pile, west of Ottawa in Canada. Despite US employment offers, Pontecorvo opted to move to Harwell, UK, in 1946 but only left Chalk River in late 1949.

Pontecorvo was a communist who could keep a secret but Close is sceptical about evidence from the former agent Oleg Gordievsky and the science correspondent Chapman Pincher about Pontecorvo passing information to the Russians.

Following his disappearance in 1950, Pontecorvo’s presence in Russia was revealed five years later. He became a Soviet citizen in 1952, having only become a British citizen in 1948. Pontecorvo’s scientific mind and his knowledge of tritium and heavy-water reactors would be valuable in the development of the hydrogen bomb for the Russians. More generally, in the second part of an active life, he was involved in the study of neutrinos and muon decay in cosmology.

This intriguing biographical mystery, with excessive archival detail for some readers, is muddled by the rigorous control of communications out of the USSR and also, Close suspects, by missing or redacted records covering failings by the UK security services and the US Federal Bureau of Investigation.

Despite the book’s subtitle, Pontecorvo was a remarkable physicist, who, without the Iron Curtain dividing Europe, may have been a potential Nobel prize winner. But was he a spy? Close’s book seeks to answer this question but perhaps his last sentence says it all: ‘You never can tell.’