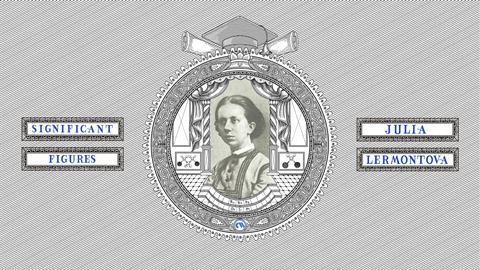 By the time Julia Lermontova successfully defended her thesis in October 1874, the number of women with doctorates in chemistry worldwide could be counted on one hand. In fact, they could be counted on one finger. At Göttingen University in Germany, Lermontova doubled the tally, probably just months behind Lydia Sesemann from Finland, who was the first woman to get a doctorate in chemistry, awarded by the University of Zurich. In a deeply patriarchal and often misogynistic society, Lermontova’s achievement was impressive. She was not only the first Russian woman to be awarded a doctorate for chemistry but also the first woman to do so at a German university.

Lermontova’s scientific contributions have largely been forgotten to history, but during her lifetime she was widely respected by her male contemporaries including Dmitri Mendeleev – who asked her to help in ordering elements in his nascent periodic table – and her work on hydrocarbons were an important contribution at the time.

Women in Russia were simply not allowed to study at university

Lermontova and other scientifically ambitious 19th century women came up against a formidable barrier to their education: 19th century men. In those days, women just weren’t scientists. To study at an advanced level, you had to be rich, able to pay for private tuition, and be in it for the love of science rather than recognition for your efforts. In many countries, universities didn’t allow women to study for any degree at all. And if women wanted to do research, finding a lab headed by a man who deemed women worthy of working there was not easy. Russia did have pockets of enlightenment, however, and several prominent chemists were supportive of female students.

Lermontova was born in 1846 to a wealthy family in St Petersburg, and her father was director of the Moscow Cadet Corps. The family lived in Moscow and her parents were wholeheartedly supportive of Julia having a thorough education, engaging the best private tutors. Her interest in chemistry was ignited during her studies, and she applied to study further at Moscow’s Petrovskaia Agricultural College. But she was rejected. Women in Russia were simply not allowed to study at university.

Thanks to a friendship with another remarkable woman, though, Lermontova eventually achieved her ambitions to take her academic studies further. She met Sofia Kovalevskaya, a married woman who was heading to Germany to pursue her own academic ambitions. Kovalevskaya probably only got married so that she didn’t need her parents’ permission to travel, allowing the move to go ahead. Kovalevskaya went on to become a remarkable mathematician.

It was in Heidelberg that Lermontova and Mendeleev first met

Kovalevskaya persuaded Lermontova’s parents to allow her to travel to Heidelberg and in 1869 she arrived to stay with the couple. Kovalevskaya’s persuasiveness also worked at the university and the two women were able to attend lectures, including those by Robert Bunsen. Lermontova was even admitted into Bunsen’s research lab. Bunsen has been described as a notorious misogynist and even a woman hater, so to be allowed into his labs was quite an achievement.

Heidelberg was a hub for Russian scientists, including the great Mendeleev. Gisela Boeck, a historian of chemistry at the University of Rostock in Germany, suggests in the book Women in their Element that it was in Heidelberg that Lermontova and Mendeleev first met. While she was working in Bunsen’s labs, Lermontova investigated the platinum metals, probably at Mendeleev’s suggestion according to a 1983 article about Lermontova by Charlene Steinberg of the University of Wisconsin in Sheboygan, US. This added to the growing body of knowledge about the precise atomic weights of this group of elements and filled in the gaps of Mendeleev’s greatest achievement – the periodic table. These metals all had similar chemistry and were found in the same ores, so separating them was a tricky problem to solve.

This crucial contribution to a foundational point in the development of modern chemistry is barely known, but Lermontova’s efforts didn’t end there. Her interests changed to organic chemistry, and she followed Kovalevskaya to the University of Berlin. Here, rather than try the conventional route to university entry, which was almost guaranteed to fail, she went straight to the organic chemist August Wilhelm Hofmann. Again as a private student, she set to work attending his lectures and working in his lab. Hofmann was a formidable and well-respected organic chemist, and appears to have been the first to introduce the beloved molecular model to the chemists’ repertoire.

Around the time Lermontova was there, Hofmann’s speciality was organic nitrogen compounds. Within months of joining Hofmann, Lermontova’s research was worthy of publication. She had re-assessed the structure of an aromatic compound known as diphenin, which was thought to be 4,4-diaminoazobenzene. But Lermontova showed that diphenin wasn’t an azo compound with its tell-tale nitrogen–nitrogen double bond at all; rather it was a hydrazo compound, with two NH groups connected by a single N–N bond, 4,4-diaminohydrazobenzene. This discovery overturned the previous work of established French organic chemists August Laurent and Charles Friedrich Gerhardt. Hofmann presented the work in March 1872 at the German Chemical Society meeting, and published it in the journal Chemische Berichte.

Lermontova then turned her attention to the subject of her thesis: diiodomethane. She interrogated this small iodine-bearing compound with a host of aromatic and aliphatic organic molecules. But even this comprehensive body of work wasn’t enough to persuade Berlin University to grant Lermontova her doctorate. Instead she submitted her work to another, more enlightened German university, Göttingen, and in October 1864 Lermontova successfully defended her thesis ‘A contribution to the chemistry of methylene compounds’ and was awarded her doctorate. This made her the first Russian woman to achieve this qualification in chemistry, and the first woman to be awarded it by a German university. Her friend Kovalevskaya had been awarded a doctorate in mathematics just a few months before, also at Göttingen.

Lermontova returned to Russia and was warmly welcomed by many Russian greats of chemistry, including Mendeleev, who elected her to the Russian Chemical Society. She was held in such esteem that Alexander Butlerov, Russia’s preeminent organic chemist, invited her to join his lab in St Petersburg. Family duty saw her return to Moscow, however, where she started working with Vladimir Markovnikov. She carried on her work on aliphatic compounds substituted with halogen groups, and she worked out a better way to make 1,3-dibromopropane. Struck down with typhus in 1876, Lermontova recovered slowly and went back to St Petersburg to live with her old friends the Kovalevskis. She could now take up Butlerov on his offer, and she joined his lab to dig deeper into organic chemistry.

During this time, Lermontova displayed an extraordinary lack of ego in a saga unpicked by Alexander Rulev of the Siberian Branch of the Russian Academy of Sciences in Irkutsk. In 1878, Bulterov was at a meeting of the Russian Chemical Society. He spotted some familiar-sounding work reported by Alexandr Eltekov from Kharkov University: a new way to make a group of hydrocarbons. Butlerov spotted that this was the same work Lermontova had undertaken a year before. But rather than claiming ownership of the work, Lermontova instead decided to give up all her research in the area, apart from finishing some experiments she’d already begun. Rulev translates a paper of Lermontova’s from 1878: ‘Taking into account that Mr Eltekov had had this article published, I refused to continue all experiments which I had already begun, but considered however that it was necessary to finish and describe those of them which led me to certain conclusions by this time…’

‘This fragment shows us that Yulya was ready to stop her experiments and to leave this field of research to Eltekov. Could you give the real-life example of such an act for modern chemists?’ asks Rulev. ‘This act of Yulya is very rare,’ he says. ‘Usually, chemists try to keep the field of research for themselves.’ Lermontova was, in Rulev’s opinion, a very strong scientist.

Her work as a chemist continued, as she returned to Moscow and Markovnikov’s lab to unpick the chemistry of petroleum deposits. But it didn’t last, and eventually she gave up her scientific work. As godmother to the Kovalevksis’ daughter, Fufa, and with Sofia Kovalevskaya pursuing her own remarkable teaching career, Lermontova found herself caring for Fufa full time. Kovalevskaya died in 1891 and Lermontova adopted Fufa.

As Lermontova retreated from chemistry, so too did her legacy. But why was she forgotten, and why isn’t Lermontova’s contribution to chemistry more widely known? Historians of chemistry Geoff and Marelene Rayner-Canham at the Memorial University of Newfoundland in Canada suggest she was victim of the Matilda effect – where women’s efforts in research have wrongly been attributed to men, even though she was held in high esteem by her contemporaries in Russia. ‘We’re thinking also that – like many women – Lermontova had the imposter syndrome and felt her work was of little consequence,’ Geoff Rayner-Canham comments.

Lermontova, this great of organic chemistry retreated to her family estate, a farm outside Moscow. She died from a stroke in 1919, aged almost 73.

Katharine Sanderson is a science writer based in Cornwall, UK