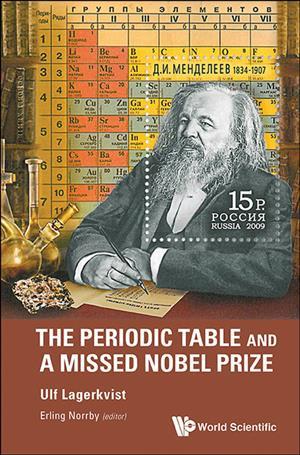 The author of this book, Ulf Lagerkvist, learned of a grant to allow publication of his manuscript The bewildered Nobel committee only to die the next month. Erling Norrby, a fellow member of the Royal Swedish Academy of Sciences (RSAS), akin to the UK’s Royal Society, edited the text, selected 28 pages of images, mainly portraits, and changed the title to focus on the contorted machinations of the RSAS committee, which awarded the 1906 Nobel prize in chemistry to Henri Moissan and not Dmitri Mendeleev. Strangely too, both these chemists died within two months of the award.

Lagerkvist’s background and command of English make him ideal to examine the RSAS committee minutes and comment on their significance in this book, although his choice of words is occasionally unusual. On the other hand, I was impressed with the use of phrases like ‘pretty penny’, ‘to boot’ and ‘came in handy’.

The book is aimed at the general science reader interested in the history of the development of scientific thought. There are biographies, sometimes including personality traits, of many European scientists with perhaps a slight overemphasis on Swedes with Linnaeus, Paracelsus, Scheele, Berzelius, Mosander and Arrhenius all featuring. I realised that Sweden had discovered almost as many elements as the UK or Germany and there is much carefully researched detail forming the background to the periodic law, Mendeleev and the 1906 Nobel prize award.

The final paragraph points out that there are other deserving candidates who never win a Nobel prize. Mention could have been made of Gilbert Lewis, who, like Mendeleev and unlike most Nobel laureates, is a name recognised by school pupils.

There were some trivial errors in this galley proof obvious to a native English speaker, which hopefully will not be in the published edition. A more serious error to correct is the assertion that Mendeleev predicted three elements to fill the atomic weight gaps between groups 17 and 1.

Overall it is a good read and I enjoyed this detailed explanation of why Mendeleev missed the Nobel prize.

Purchase The peridoic table and a missed Nobel prize from Amazon.co.uk