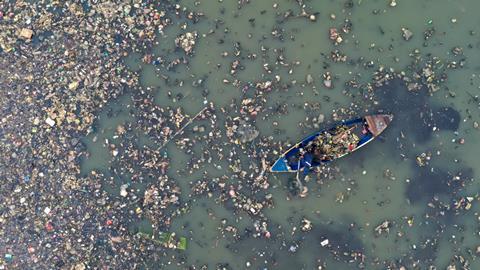 The UN Environment Assembly, which will begin in Nairobi on 28 February, will be working to develop a legally binding international treaty on plastic pollution. This comes as one study claims that the production of chemicals and plastics has already outpaced our ability to assess and monitor them, and in doing so threatens critical systems that we depend on.

The researchers behind the new study conclude that chemical pollution has crossed a planetary boundary. The idea of planetary boundaries which define a ‘safe operating space’ for humanity was proposed more than a decade ago. Nine were identified – including climate, biodiversity and ocean acidification. Breaching those thresholds would cause large scale or irreversible environmental change.

Unlike climate change, no-one’s established a quantitative boundary for pollutants like plastics – now labelled novel entities – as many of them did not previously exist on Earth.

‘We started but we’ve always stumbled – it’s like a mind-bending exercise, trying to think how would you assess 350,000 chemicals for their potential to disturb the Earth’s systems. How would you count that? Now we’ve realised you can’t have a number,’ says Cynthia de Wit at the department of environmental science and analytical chemistry at Stockholm University.

The international team of researchers that includes de Wit have instead proposed using a series of control variables, which could be combined to make a judgement. ‘Without control variables, you have no way of trying to push for policy or solutions,’ she suggests.

To qualify as a control variable, the researchers looked at whether a process, such as global plastics production, could be measured, robustly linked to effects on earth system function and capture the planetary scale of the problem.

They acknowledge that none of the individual variables they propose – such as trends in production of hazardous chemicals – fulfil all three criteria on their own, but that jointly they could provide the basis for a strategy to signal risk and inform action.

They consider the trend in the number and volume of chemicals being produced to approximate to the aggregate chemical burden. Although full data aren’t always publicly available, trends are clear for substances like plastics and pesticides: production volumes have grown and are expected to continue to rise rapidly. The authors point out that even when one group of chemicals is restricted because of the harms identified such as bisphenol A in polycarbonate plastics, it doesn’t lead to reduced production but to a shift to closely related chemicals. 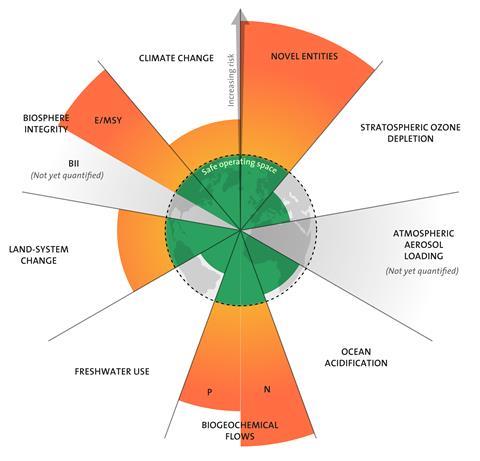 Source: © Designed by Azote for Stockholm Resilience Centre, based on analysis in Persson et al 2022 and Steffen et al 2015

Humanity’s production of chemicals is outstripping the safe operating space for them, according to one analysis

Weighing production volumes against another variable – the share of chemicals with safety data or regulatory assessments – ‘we come to the conclusion that when production volumes and emission rates are faster and higher than the rate we can risk-assess the chemicals, we’ve crossed a boundary’, says de Wit. She cites the EU’s Reach chemical regulatory system, which has been operating for 10 years, but is still yet to assess around 80% of chemicals that are produced at 1 tonne or more per year that are not intermediates.

Meanwhile, in the run-up to the Environment Assembly, over 150 countries have backed a resolution put forward by Rwanda and Peru to tackle plastic – and its associated pollution – over its entire lifetime. In December, China also said it would be willing to explore the option, while in January, a group of 74 businesses including financial institutions, consumer goods companies including Unilever and Danone, and plastic processors and producers such as Borealis and Alpla added their voice. They said a global pact should aim to keep plastics out of the environment, reduce virgin plastic production, and use and decouple its production from fossil fuels.

Thava Palanisami, at the University of Newcastle in Australia who is working on the health impacts of microplastics and was not involved in the study, describes the research as ‘a good start, providing comprehensive evidence’. He argues the situation is made more complex because of the impacts of combinations of chemicals. His research has shown that microplastics in the environment provide an ideal surface for the formation of biofilms that can absorb perfluorooctane sulfonate and lead, potentially increasing their ecotoxicity.

Palanisami backs calls from scientists for a UN body to address chemicals pollution. Next month’s long delayed fifth meeting of the UN Environment Assembly is expected to consider a draft resolution to set up an international science policy panel for chemicals, waste and pollution, submitted by six nations including the UK. Bob Watson, a former chair of both the Intergovernmental Panel on Climate Change and the Intergovernmental Science-Policy Platform on Biodiversity and Ecosystem Services, says a science panel would complement these ongoing processes, as well as strengthening existing chemical conventions ‘It’s not an action-oriented thing itself, but it can tell the world what the problems are, and what the options are to address them,’ he explains.

However, he points to two challenges: persuading governments to stump up what he estimates could be $4–6 million (£3–4.5 million) a year to run the panel, as well as making information that is largely held by the private sector, freely available. He suggests initially working with chemical companies aiming to become more sustainable. Industry doesn’t want to be regulated, says Watson. ‘They need to get ahead of regulations – if they can be a first mover to be more sustainable, they can grab a market that their competitors can’t and there are actually a lot of people in the world today, who want industry to be sustainable and will buy products from a more sustainable company rather than an unsustainable company.’

De Wit and her colleagues say they are ‘not naive to the considerable challenge posed by reducing chemical and plastic releases’ to protect the planetary boundary. ‘We aren’t saying you have to stop all chemical production, because we realise chemicals will be needed,’ she says. ‘But you have to start thinking how can we change the system so it becomes more sustainable and less likely to threaten the planet.’