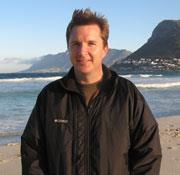 Jeremy Smith is an associate professor at New Mexico State University in the US. His research is concerned with the synthesis, characterisation and reactivity of transition metal complexes. Spectroscopic and mechanistic investigations of these complexes are expected to provide insight into important biological and industrial transformations. In particular, his group’s work is focused on metal complexes of strongly donating ligands, such as tris(carbene)borates and metal ligand multiple bonds.

I was always interested in science and technology but when I started university I wasn’t too sure what in particular I was going to study. I chose the science route rather than engineering as there were more options on this course. In my very first year at the University of the Witwatersrand, South Africa, I was lucky to have the chance to work in a lab with Neil Coville. I really enjoyed this and the lifestyle that went with it. This was probably the most important event that drove me to be a chemist.

What motivated you to specialise in synthesising metal complexes?

As for many inorganic chemists, the colours attracted me. When in my fourth year at university, I did a project in organic chemistry and I was turned off by the columns.

Columns versus colour - colour wins for me!

I always liked things with multiple bonds in them. When I was a postdoc and starting out, people figured out how to make multiple bonds more stable for late transition metals and this was very good timing for me to start work in this field.

What projects are you working on at the moment?

We are looking in more detail at the chemistry in our iron(V)nitride complexes. We would like to understand more about what is going on and are working on some collaborations to look at the spectroscopy.

We have also had a recent serendipitous discovery of a complex with a spin cross-over system, which is quite new and we are now looking at this in more detail, at possibilities for nitrogen transfer for example. We are continuing to try to make other metal-ligand multiple bonds.

What’s hot at the moment in your field?

The study of redox active ligands is an exciting but very tough area. It can be hard to understand what is going on.

Another topic that’s pretty cool and just developing now is the design of multi-metal complexes such that they can have some kind of reactivity related to biology, for example, multi-metal active sites of metalloenzymes. Again, this is a difficult field as the characterisation can be a nightmare.

Scientific funding models all over the world are different. In your experience, what funding system is the most effective?

I might offend some people inadvertently with my views on this topic! Obviously, I know most about the US system and the good thing about it is that in principle, it’s possible to get large amounts of funding. However, it is very cut-throat and we spend a great deal of time writing proposals. Having spoken to other people I feel sometimes the cart is going before the horse, as we are spending more and more time on proposal writing now than anything else.

From what I know about the system in Canada for example, instead of funding projects they fund programmes so it’s more predictable. Researchers don’t spend as much time writing proposals but the amount of funding can be less. From an outsider’s perspective this looks like a good system.

In South Africa, when I was there in 1999, the money was very tight and there was essentially no starter funding. Younger researchers needed to rely on other senior colleagues to get chemicals.

However, this summer I went on a trip back home, which was illuminating as far as research funding goes in South Africa.  I think things are a lot better now than they used to be. The level of support infrastructure is much better and is better than some US schools. There is more money available now, although it seems that you have to be in a team to be really competitive.  A couple of things stood out - one is that it is very easy to get travel money, even for overseas travel and another is that the National Research Foundation gives institutions money for each paper that is published, with some of this money making its way back to the investigators.

If you were cast away on a desert island and had to choose three scientific papers to have with you there, what would they be?

I’m not sure I would take scientific papers to a desert island but...

This paper by Kit Cummins and colleagues at MIT is a great piece of work and features an important result in the field of transition metal chemistry. It really examined aspects of the reaction and figured out what was going on.

An instance of trivalent carbon: triphenylmethyl2

This paper is interesting because in 1900 they did not have all the spectroscopic tools we have now so it was really by deductive reasoning alone that Gomberg figured out that that there was a radical forming here and not a closed shell system. We use this radical in some of our own chemistry. I really like the last line: This work will be continued and I wish to reserve this field for myself.

This last paper is just for fun as it is written completely in verse. Scientifically, this is not of interest to me but the idea of writing a paper in verse is pretty cool. I advise people in particular to read the note from the editor!

And if you had to take one luxury, in addition to your scientific papers, to the same island, what would you take?

A speedboat so I could get off!

What is the scariest reagent you have ever worked with?

Neat trimethylaluminium. I didn’t use it though. When I was a graduate student, I was ready with a fire extinguisher behind the guy who did! There was one incident where a student forgot to close the syringe lock when transferring it to a reaction and a flame jumped out of the syringe. Fortunately, no one was hurt.

You are originally from South Africa. Is there anything, other than family and friends, that you miss now that you are living in the US?

This is a hard question to answer as, before this summer, I had not been back to South Africa for ten years. In Johannesburg, which is where I am from, the climate is really good. I think people living there don’t realise until they leave how wonderful the climate is. It’s seldom too hot, almost never too cold and never humid. Fast food in South Africa is better than in the US and of course, I miss the sports - rugby, cricket and football.

Since your recent Science paper was published, your research has received considerable attention. How do you feel about the phenomenon of the ’celebrity chemist’?

I have mixed feelings about this...it is good to have proponents for science, especially if they are in your field. The downside is that they can skew the way things go, particularly the way funding is allocated. There is an expectation that scientists should be more involved with the public now and I understand the reasons why but it’s not for everybody. Also, people that are less outgoing might be disadvantaged by the system, which sometimes favours people that are more gregarious. There needs to be an appreciation that not everyone likes to do it or is good at doing it.

Quick fire questions - choose the first one that comes into your head!