Bees can distinguish between ordinary odorant molecules and versions with some hydrogen atoms replaced by deuterium, because the two variants of the smell-triggering molecules elicit different patterns of neural encoding in their brains. That’s the conclusion of a team of scientists in Italy, who have sought to clarify the debate over whether bees can discriminate isotopic forms or isotopomers of odorants.1 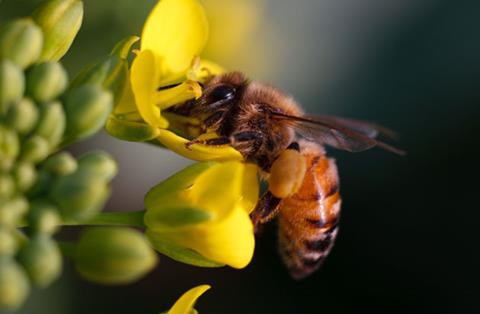 The findings add a new twist to the long-standing and sometimes acrimonious argument over the mechanism of sensing smells. The Italian team, led by Albrecht Haase at the University of Trento, says that their results lend support to a controversial model of olfaction in which different neural signals are generated in the olfactory system by a mechanism that detects the vibrations of odorant molecules bound to olfactory receptor proteins. This contrasts with the standard view in which different smells are determined by the shape of the odorants, which sit within the binding sites of receptors like a lock and key.

Earlier studies seemed to show that bees, as well as fruitflies and perhaps humans, can tell the difference between odorant isotopomers.2,3 But those studies looked at behavioural differences, which can be hard to interpret reliably. Some researchers still claim that there is no good evidence of isotopomer discrimination, or at least for a vibrational mechanism that accounts for it.4,5

Haase and co-workers, in contrast, have peered directly into the brains of honeybees when they are presented with different odorant isotopomers. ‘We’re looking upstream of any behavioural phenotype, so we can exclude potential behavioural or cognitive effects due to other experimental components than the odorant cue,’ says Haase’s colleague, neuroscientist Marco Paoli.

When bees smell, the odorants bind to smell receptors on one end of olfactory neurons, which carry the signal to areas of the brain called antennal lobes. The antennal lobes contain clusters of neuron endings called glomeruli, and each odour elicits a distinct fingerprint pattern of activation across all the glomeruli.

The Trento team was able to see these activation patterns for different odorants using a technique called functional calcium imaging. Activation of the neurons involves a rise in the concentration of calcium within the glomeruli, and the researchers monitor this by using lasers to excite fluorescence in a calcium-sensitive dye and inspecting the emission under a microscope.

They found that there are small but significant and consistent differences in the activation patterns stimulated by four common bee odorants – octanol, benzaldehyde, acetophenone and isoamyl acetate – and the respective versions that carry between three and 17 deuterium atoms. They used gas chromatography to rule out any possibility of contamination that might explain the differences.

‘I was quite surprised by the findings’, says Paoli. Despite the earlier behavioural studies, he anticipated that any neurological differences between isotopomers would be ‘small and very difficult to characterise’. In contrast they proved to be robust and rather uniform among different individual bees.

It is hard to see how a straightforward lock-and-key model of olfaction can enable this discrimination, given that deuterated and undeuterated molecules have essentially identical shapes. Because the mass of deuterium is twice that of ordinary hydrogen, however, the vibrational spectra can be very different in the regions corresponding to stretching of C–H bonds, which occur at infrared wavelengths. Haase and colleagues showed that these spectra are indeed distinct for the compounds they tested.

What’s more, the greater the spectral differences, the more pronounced the differences in glomeruli activation. The results, they say, therefore favour the vibrational model of olfaction. This is dramatically different from any other known biological sensing mechanism, because it assumes that the spectral differences between odorants are detected via quantum mechanical tunnelling of electrons at the binding site.6

Will this settle the arguments? That seems unlikely. Neuroscientist Wulfila Gronenberg of the University of Arizona in the US, who has previously reported behavioural differences in honeybees exposed to odorant isotopomers, says that the work is ‘of high standard’ and is persuaded that the differences in neural response are real. But he doesn’t think it clinches the vibrational hypothesis.

‘The physicochemical properties of deuterated compounds seem to be more different from their hydrogen counterparts than the authors of the current and previous studies admit,’ he says. ‘I think it is possible that IR vibration spectra contribute to the odorant–receptor interactions, but neither the current study nor previous studies prove this idea, as deuteration has more effects than just changing the vibrational spectrum.’

‘Certainly, our paper does not give any final proof for a vibrational mechanism in odorant reception,’ Paoli agrees. The mechanism is still elusive, he says, and molecular shape probably still plays an important role too. But he adds: ‘I think we’ve managed to shift the debate from a hazy cognitive level to the neural representation of those odorants in the brain periphery, where odours are first coded.’